One of five identical prototype combat mobile suits developed by Orb using stolen data from the Earth Alliance's G Project. Gundam Astray Green Frame features the same weaponry as the other prototype Astray units, including the two head mounted "Igelstellung" 75mm multi-barrel CIWS, two beam sabers, a Type 71 beam rifle and a physical shield. Besides these weapons, the Green Frame is also equipped with a Twin sword rifle, a weapon that can function as a beam rifle, an axe or as a twin beam sword. Another feature that Green Frame share with the other prototype Astray units is the movable backpack that can be lowered to the back skirt armor, allowing the mounting of additional equipment on its back.

Despite the suit's name, it is not green in color initially. The suit's original color is unknown, but it is painted green as its first pilot, Barry Ho, planned to use it in the jungle. Another color related change is that the suit uses sensor units with different color that makes its eyes yellow instead of green like the other Gundam Astrays. The Green Frame also has an advanced combat support AI, which is an improved version of the A.I. system featured on the MBF-02 Strike Rouge. Green Frame's A.I. system is advanced enough to predict Gai Murakumo's movements in the MBF-P03third Gundam Astray Blue Frame Third when he was on the offensive, allowing Trojan Noiret to evade all of Gai's attacks. Despite this, when Trojan switched to the offensive, Gai swiftly defeated him. Due to this, Green Frame is considered to be a defensive mobile suit, to be used for protecting others and not for offensive purpose.

Mounted in the Green Frame's head are two "Igelstellung" 75mm multi-barrel CIWS guns. Although classified as anti air, these light projectile weapons can be used to intercept missiles and to destroy lightly armored vehicles.

The Green Frame can use a physical shield for defense, it is mounted on the left forearm and/or handheld. This is the same type of shield used by the Strike Gundam and Duel Gundam.

The standard beam rifle used by all the prototype Astray units. It fires a beam that is highly effective against most targets, such as mobile suits, but is less effective against targets designed to take beam attacks, such as laminated armor or shields treated with an anti-beam coating.

A 3-in-1 weapon used by Green Frame, it can function as a beam rifle, an axe or as a twin beam sword. When used as a twin beam sword, the beam sword emitters will slide forward and the weapon can be held using the rifle's mode handle or by the back of rifle. In axe mode, the barrel of the rifle becomes the handle.

An artificial intelligence system developed by Lowe based on a similar system installed on the MBF-02 Strike Rouge. It can predict an opponent's offensive move and helps the pilot avoid it. It is however useless when the pilot goes on the offensive. Due to this system, Green Frame becomes a defensive MS.

On January 25, CE 71, ZAFT's attack on Heliopolis to steal the G Project units also unknowingly interrupted the Astray project. In order to hide their progress, Orb's officials decided to destroy the Astray lab. However all Astray prototypes survived and fell into the hands of different factions. Prior to the second war, Rondo Mina Sahaku handed over the Gundam Astray Unit 4 in her possession to "God of Fist" Barry Ho. The suit was in its unassembled form, but was assembled with help from Lowe Guele and painted in green to match Barry's intention to use it in the Jungle. As a result of this, the suit also gains the name 'Gundam Astray Green Frame'. Barry later gives the Green Frame to Trojan Noiret, a member of a guerrilla force, for use against the ZAFT and EA forces in the Republic of East Asia. Trojan used his suit against Gai Murakumo of the Serpent Tail mercenary group twice, but they later became allies. 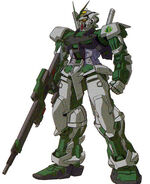 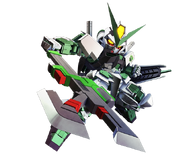