The Astray Blue Frame Third is a modified form of both the Blue Frame Second G and Astray Blue Frame Second L, it has a new head and backpack unit as well as redesigned armor to carry the new armaments. However, the internal components remain mostly unchanged and as such, it can easily switch back to Blue Frame Second G or Blue Frame Second L. It is developed by Lowe Guele to allow the Serpent Tail to carry out its mission in forested area, where there are many obstructions and the use of beam weapons are restricted to prevent any fires. Due to these reasons, the main weapon of the suit is a pair of arm-mounted physical blades, which are equipped with anchor launchers similar to those on the GAT-X105E Strike Gundam E. Besides these blades, the suit is also equipped with various weapons to handle a variety of situation. It has a pair of head-mounted CIWS, four leg-mounted beam blades, a pair of foldable combat knives, and a pair of beam rifles, which store another pair of combat knives.

As the mission requires Serpent Tail to work with the Alliance unit in the area, the Blue Frame Third is equipped with an enhanced V-fin on its new head, improving its communication ability with friendly units. The new backpack is movable and can open up to reveal more thrusters for better mobility. Data collected from Blue Frame Third is later used to upgrade Astray Blue Frame Second L into MBF-P03R Gundam Astray Blue Frame 2nd Revise. The mysterious organization known as Librarian Works also collected data on this machine and used it to develop MBF-P05LM Gundam Astray Mirage Frame.

A pair of CIWS are mounted in the head and although classified as Anti Air, these light projectile weapons can also be used to intercept missiles and to destroy lightly armored vehicles.

Mounted on the side of each forearm, they are the main weapons of the Blue Frame Third and made from a rare metal. The blades swing forward when in use and each of the arm mount is equipped with an anchor launcher similar to those of the Strike E's. The blades can block/deflect range beam attacks and this maybe due to them having anti-beam coating.

Mounted at the back of each leg, these anti-beam coated knives swing forward when in use and serve as kicking weapons. They are longer than the ones on Blue Frame Second L/G, and are unrelated to the combat knives used by Strike Gundam.

Two beam blades are concealed within each leg, one is mounted near the lower edge of the foldable knee armor, while the other is mounted in the leg itself. Together, they can form a pincer-like weapon on each leg.

A pair of specially designed beam rifles are stored on the rear waist armor. They are only used during battles in man-made facilities/bases and have "Armor Schneider" combat knives stored at the back. These knives are the same as those used by Blue Frame Second L/G.

Inherited from Blue Frame Second L/G, it is a two-layer armor system with the PS armor on the inner layer activating only when the outer armor is breached. This design helps to reduce energy consumption. It is installed only around the cockpit so as to keep the MS light and mobile. The Earth Alliance also has the exact same armor system, but the one installed on this suit was independently thought up by Lowe Guele and not a copy of the EA's. 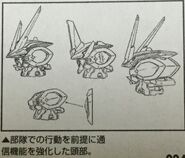