The Blue Frame Second L is created after MBF-P03 Gundam Astray Blue Frame is damaged in battle against the Socius clones, and combines upgrade parts that Gai designed, with upgrade parts developed by Lowe for his MBF-P02 Gundam Astray Red Frame. In addition, its cockpit is now protected by Trans Phase armor. The parts that Gai designed (new feet and shoulder armor) are already in production before the fight, but did not make it in time. The new, smaller feet give the MS better jumping power and are mounted with retractable "Armor Schneider" combat knives in the heels and toes, which could be used as kicking weapons or as anchoring spikes. The new shoulders contain fin thrusters to improve the suit's evasion capability, and can also be used to make unexpected sideways maneuvers during battle. Two other combat knives are also equipped on the hips.

The new head and "Tactial Arms" backpack are developed by Lowe for his Red Frame, but are instead used to repair the damage Blue Frame so that the process can be expedited. The "Tactical Arms" is a flight unit equipped with a 90mm Gatling gun, and can be detached and reconfigured as either a hand-carried gun (aka Gatling form) or a huge 20 meter sword (aka Sword form). The new head has increased armor for better protection of internal electronics and through its antenna, short range remote control of the Tactical Arms is possible. Blue Frame Second L also stores additional power packs on its rear skirts and they are often used together with the Gatling form. It could also carry an additional weapon: a mobile suit sized version of the Archangel class assault ships' Lohengrin Positron Blaster Cannons. The suit's battery was later replaced by Morgenroete Inc. with one that has higher performance, this improved the suit's operating time by 30%.

Mounted in the head are two "Igelstellung" 75mm multi-barrel CIWS guns. These light projectile weapons are used to intercept missiles and to destroy lightly armored vehicles.

The Blue Frame Second L is armed with six anti-beam coated "Armor Schneider" combat knives. Four are mounted in the feet as retractable combat knives in the heels and toes, while the remaining two are stored in mounts on the hips. Gai frequently deployed the knives in the feet as weapons during kicks, while the other two knives are used to block beam sabers and even range beam attacks. Blocking range beam attacks using the knives can only be done by pilot as skilled as Gai. Despite the name, these knives are unrelated to the ones used by Strike Gundam.

A multifunctional equipment designed by Lowe, it is stored on the back and can function as a flight unit or as a weapon. It carries out its different functions by transforming into the appropriate form: Flight form, Sword form or Gatling form.

The standard form of the Tactical Arms, it provides the Blue Frame Second L with flight capability. By adjusting the position of the folded wing-like components, it allows the MS to move in an irregular manner, making it difficult for the enemy to aim. However, this can be done only if the pilot has exceptional piloting skills. The mounted Gatling gun can be used in this form for shooting at pursuing enemy units.

The Tactical Arms is capable of folding into a 20-meter large sword, which can also function as a shield due to its size. The blade has an incredibly sharp edge and even if it did not damage the enemy’s armor, the impact due to its size can damage internal components or badly rattle the pilot, and may even lead to unconsciousness in serious cases. During Gai's battle with Hyperion Unit 3, it is revealed to have laminated armor and can release the heat absorbed through Tactical Arms's exhaust ports. The sword blades can be split apart to allow the use of the Gatling gun in this form.

The second weapon form of the Tactical Arms and often used by Gai to destroy bases and facilities. The four-barrelled 90mm Gatling gun has the highest accuracy when used in this form. In this form, the sword blades are used to make a balancing stand to stabilize the gun while firing, and can also protect the MS from enemy fire as well as serves as heat sinks during prolong shooting. Initially, the Gatling gun is a physical projectile weaponry, but it is later modified by Gai to fire physical projectiles and beams from two barrels each, a mix of both is also possible. This form frequently mounts the additional power pack stored on the suit's rear skirt armor.

Stored in two pieces on Blue Frame Second's hips, and connected into a single gun for use. It is powered by its own ultracompact nuclear reactor (mounted on the rear waist armor), but unfortunately, Gai did not possess N-Jammer Canceller technology, so it could only be used when another mobile weapon with N-Jammer Canceller is close by.

It is a two-layer armor system with the PS armor on the inner layer activating only when the outer armor is breached. This design helps to reduce energy consumption. It is installed only around the cockpit area so as to keep the weight down and to ensure that Blue Frame Second L is as mobile as the original Blue Frame. The Earth Alliance also has the exact same armor system, but the one installed on Blue Frame Second L was independently thought up by Lowe Guele and not a copy of the EA's.

Blue Frame Second L can dock with the powerful METEOR unit developed for Justice and Freedom Gundam. However, the METEOR has to be fitted with N-Jammer Canceller and nuclear reactor before it can be used by the Second L.

While on Earth during the First Alliance-PLANT War, Gai Murakumo and his MBF-P03 Gundam Astray Blue Frame would battle against rogue "Combat Coordinator" Eleven and Seven Socius and their GAT-01D Long Dagger. During the battle, Astray Blue Frame's backpack was destroyed and its head removed as proof that the Socius clones defeated Gai.

The damaged Blue Frame was later transported back to Orb's Morgenroete Inc. factory for repair. Coincidentally, Lowe Guele was also at Orb to collect his new upgrade parts for Red Frame and witnessed the damage Blue Frame. Due to injuries he received during battle, Gai was unconscious for a few days and the repair work was left to Lowe and Erica Simmons. Lowe then donated Red Frame's upgrade parts to expedite the repairs and came up with the two layer armor system around the cockpit region, in which the inner layer consisted of Phase Shift armor and would activate when the outer layer was breached. Erica then ordered the use of spare PS armor from Strike Rogue to be used for this two layer armor system. The upgrade parts that Gai ordered were also ready and fitted on Blue Frame and all these modification then led to the creation of Gundam Astray Blue Frame Second L.

After awakening, Gai immediately used Blue Frame Second L in a rematch against the Socius clones and won. Gai then use the Blue Frame Second L for various missions. One mission he was possibly hired for, or where he simply decided to help Lowe, was to take out the MBF-P01-ReAMATU Gundam Astray Gold Frame Amatsu which had been destroying ZAFT mobile suits and ships. Gai lent Lowe the use of the Tactical Arms sword with which Lowe was able to cut off one of Gold Frame's arms. With Gold Frame thus damaged, Gai took the opportunity to use Armor Schneiders to critically damage the mobile suit, killing Rondo Gina Sahaku.

Later, in the battle against the huge Mobile Armor TSX-MA717/ZD Pergrande, Gai equipped the Blue Frame Second L with a Positron Blaster Cannon. During the battle, Gai closed to point blank range (within influence of the Pergrande's own N-Jammer Canceller) and destroyed the Pergrande with a single shot of his Positron Blaster Cannon. The Blue Frame Second L is eventually modified into the MBF-P03R Astray Blue Frame 2nd Revise. 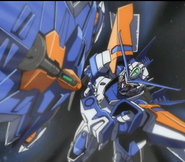 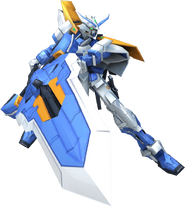 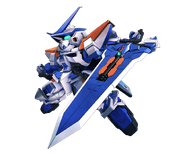