The Astray Blue Frame Second G is another configuration of Astray Blue Frame Second. The "G" in the designation stands for "Gai" and is added to differentiate it from Blue Frame Second L. Astray Blue Frame Second G is the original upgraded form of MBF-P03 Gundam Astray Blue Frame that Gai had in mind. It features redesigned shoulders and feet designed by Gai himself, while the rest of the MS is unchanged from that of the original Blue Frame. The new, smaller feet give the MS better jumping power and are mounted with retractable "Armor Schneider" combat knives in the heels and toes, which could be used as kicking weapons or as anchoring spikes. The new shoulders contain fin thrusters to improve the suit's evasion capability, and can also be used to make unexpected sideways maneuvers during battle. Two other combat knives are also equipped on the hips. As Gai wants Second G to be a fast and mobile MS, he discards the physcial shield; he plans to rely on the MS's speed to dodge beam attacks and the antibeam-coated combat knives or the back-mounted beam sabers to battle against other melee beam weapons.

The Second G is in possession of six anti-beam coated "Armor Schneider" combat knives. Four are mounted in the feet as retractable combat knives in the heels and toes while the remaining two are stored in mounts on the Second G's hips. Gai frequently deploy the knives in the feet as weapons during kicks while the other two knives are used to block beam sabers and even range beam attack. Blocking range beam attacks using the knives can only be done by pilot as skilled as Gai. Despite the name, these knives are unrelated to the ones used by Strike Gundam.

A pair of them are mounted on the backpack, they are used in situation where the combat knives are useless.

The Second G can mount up to two short rifles, one on each forearm.

The main weapon of the Sniper Pack.

It is a two-layer armor system with the PS armor on the inner layer activating only when the outer armor is breached. This design helps to reduce energy consumption. It is installed only around the cockpit area so as to keep the weight down and to ensure that Blue Frame Second G is as mobile as the original Blue Frame. The Earth Alliance also has the exact same armor system, but the one installed on Blue Frame Second G was independently thought up by Lowe Guele and not a copy of the EA's.

An equipment developed to allow long-distance sniping, it consists of a special backpack that mounts the sniper beam rifle as well as a targeting sensor. When in use, the sniper rifle is slung under the right shoulder while the targeting sensor flips foward and is positioned over the left shoulder. When equipped with this pack, Blue Frame Second G's backpack is lowered to the rear skirt armor. The Second G can also mount a Short Rifle on its left forearm together with the Sniper Pack.

An optional head equipment developed for Gundam Astray Blue Frame, it can also be used by Second G. It greatly increases Blue Frame Second G’s communication, sensing capability and information processing power. On the flipside, the various detectors in the sensor unit are very energy draining and processing of the complex data place a heavy burden on the OS. The sensor unit contains a dedicated computer to process these data.

The Astray Blue Frame Second G is the original upgraded form of MBF-P03 Gundam Astray Blue Frame that Gai had in mind. However, the upgrade parts were not ready before Gai's battle with Eleven and Seven Socius. They were fitted onto Blue Frame at the same time as repairs were made to the damaged MS. 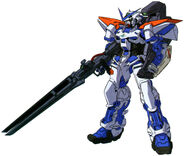