A variant of the Astray Blue 2nd Revise, it is equipped with the Full Armor Phase Shift (FAP) system that is given to Gai by a third party for a mission near the sun. Besides the FAP system, the Blue Frame Fourth also has a different head unit, and shoulder armor that are the same as those used by the original Gundam Astray Blue Frame. The FAP System consisted of Phase Shift armor plates, independent battery unit, ablative gel heat protection system, additional thrusters units and a pair of laser cannons; it can also switch between two modes - High Speed Mode for improved speed and thrust, and Full Armored Mode for better protection from the sun's intense heat. In terms of weapons, other than the laser cannons, the suit also has a large vulcan on its head, six "Armor Schneider" combat knives on its body, and a pair of arm-mounted short rifles.

Mounted on the left side of the head, the vulcan has weak firepower but a high rate of fire. It can be used to intercept missiles and to destroy lightly armored vehicles.

The suit is in possession of six anti-beam coated "Armor Schneider" combat knives. Four are mounted in the feet as retractable combat knives in the heels and toes while the remaining two are stored in mounts on the suit's hips. Gai frequently deployed the knives in the feet as weapons during kicks while the other two knives are used to block beam sabers and even range beam attacks. Blocking range beam attacks using the knives can only be done by pilot as skilled as Gai. Despite the name, these knives are unrelated to the ones used by Strike Gundam.

A pair of short rifles are mounted on the suit's arms.

A pair of laser cannons are installed in the white containers of the FAP system. They can flip forward when in use.

Inherited from Blue Frame 2nd Revise, it is a two-layer armor system with the PS armor on the inner layer activating only when the outer armor is breached. This design helps to reduce energy consumption. It is installed only around the cockpit area so as to keep the suit light and mobile. The Earth Alliance also has the exact same armor system, but the one installed on this suit was independently thought up by Lowe Guele and not a copy of the EA's.

An external armor system developed by a third party so that Gai can complete a mission near the sun. The FAP System is mounted on the suit's back, and has two modes - High Speed Mode and Full Armored Mode. In High Speed Mode, the FAP system transforms into a flight pack for increased speed and thrust. In the Full Armored Mode, the FAP system wraps around the MS, with the Phase Shift armor plates providing added protection from the sun's intense heat. Regardless of the modes, an ablative gel heat protection system can be used to reduce the effect of the sun's heat on the MS. As a side effect of having the ablative gel, the suit is also capable of atmospheric entry. The FAP system is armed with two laser cannons and is powered by its own compact energy battery.

Some time after the end of the war between Naturals and Coordinators, Serpent Tail was employed by an unknown party to destroy a cannon that is near the sun. It is unknown who or what organization created this cannon, but it is aimed at Earth. To accomplish this difficult mission, the employer gave Gai the Full Armor Phase Shift (FAP) system. 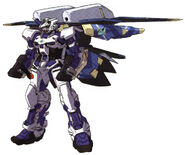 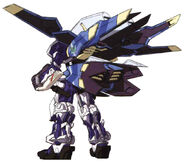 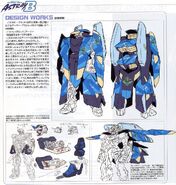