The MBF-P03 Astray Blue Frame was one of five identical prototype combat mobile suits developed using stolen data from the Earth Alliance's G Project and was designated for testing optional equipment. Its computer contains data and blueprints for various optional equipment. Most of the technology from the G Project was successfully copied with the exception of Phase Shift armor. In its place the Astrays' designers made the machines out of a lighter foaming metal compound and were built with minimal armor over the frame. This made the Astray mobile suits lighter and faster than their G Project counterparts.

Originally, the Astray Blue Frame was armed with the standard armament of the other prototype Astray suits. These weapons include two head-mounted "Igelstellung" 75mm multi-barrel CIWS, two back-mounted beam sabers for close combat, a Type 71 beam rifle, and a single physical shield. However its mercenary pilot used his resources to outfit the Astray Blue Frame with a wide variety of equipment to suit multiple combat situations and to meet the needs of different mission. Like the other prototype Astray suits, Astray Blue Frame's backpack can be lowered to the back skirt armor, allowing the mounting of additional equipment on its back.

Mounted in the Blue Frame's head are two "Igelstellung" 75mm multi-barrel CIWS guns. Although classified as anti air, these light projectile weapons can be used to intercept missiles and to destroy lightly armored vehicles.

Blue Frame can use a physical shield for defense, it is mounted on the left forearm and/or handheld. This is the same type of shield as used by Strike and Duel Gundam.

A handheld weapon used by Blue Frame when it is equipped with Scale System. The rifle is mounted with 6 supercavitating torpedoes for ranged aquatic combat.

A pair of combat knives are mounted on the Blue Frame's hips when it is using the Scale System. These knives are the suit's main close combat weapons when it is underwater, as the beam sabers cannot be used in aquatic environment.

As a mercenary, Gai gets into plenty of lopsided MS battles; that's why he designed a "Full Weapon" form for Blue Frame in which the MS is equipped with multiple bazookas and missile launchers that are also used by ZAFT's mobile suits. These armaments are solid projectile weapons that do not use much energy, allowing Gai to fight multiple enemies easily. They can be purged or discarded when necessary. He used this form when guarding the Eurasian Confederacy's Artemis space fortress.

Constructed using the blueprint found within Blue Frame's computer, the complete sensor unit is an optional head equipment. It greatly increases the MS’s communication, sensing capability and information processing power. On the flipside, the various detectors in the sensor unit are very energy draining and processing of the complex data place a heavy burden on the OS. The sensor unit contains a dedicated computer to process these data.

An optional booster unit developed by Serpent Tail in order to recover data from a high speed spaceship that lost control during testing. It seems to be attached to the suit through the external connector.

For aquatic mission, Gai can equip Blue Frame with a "Scale System" armor, which has numerous tiny scales that vibrate to propel the mobile suit through the water and can also serve as makeshift shield against phonon maser. With these parts, Blue Frame has higher underwater mobility than ZAFT's aquatic MS but the diving depth is relatively limited, since the mobile suit itself is not built to resist high pressures. Additional sensors such as active and passive sonar have also been installed in the Blue Frame's head. This set of equipment was built by Morgenroete Inc. under Erica's command and serve as payment for employing Gai to complete certain missions. The equipment proved itself in battle on Giga-Float against Gold Frame, in which Gai fought off Rondo Gina to protect the installation. The back mounted portion of the Scale System seems to be attached to the suit through the external connector.

The Orb Union's Morgenroete corporation built five Astray prototype mobile suits at Heliopolis, the MBF-P01 Astray Gold Frame, MBF-P02 Astray Red Frame, MBF-P03 Astray Blue Frame, MBF-P04 Astray Green Frame, and MBF-P05 Gundam Astray Unit 5 (which was later modified into MBF-P05LM Gundam Astray Mirage Frame) which were based on the five G Project Gundams that they assisted the Earth Alliance's Atlantic Federation in creating. They successfully copied the EA's beam rifle and saber technology, but Morgenroete did not have access to the Phase Shift armor design, and compensated by making the Gundam Astray units lighter and more agile than their EA counterparts. Unlike Gold Frame, Blue Frame was fitted with only Orb hand plugs, and thus could not use Earth Alliance weapons.

On January 25, CE 71, ZAFT's attack on Heliopolis to steal the Alliance Gundams also unknowingly interrupted the Astray project. In order hide their progress, Orb's officials decided to destroy the Astray lab. Coordinator Rondo Gina Sahaku, an Orb nobleman, disagreed and attempted to save the save the three suits, Gold Frame, Red Frame and Blue Frame, that were assembled. He ordered one of his subordinate to split all the Astray data among the three MS and Blue Frame was uploaded with specifications for a variety of optional weapons and equipment. Blue Frame was soon located by Junk Guild technician Lowe Guele, who found himself having to use it to protect himself from Coordinator mercenary pilot Gai Murakumo of the Serpent Tail company, who had been hired to eliminate all evidence of the Astray program. Over the course of the conflict, Lowe abandoned the Blue Frame in a ploy to disable Gai's Mobile Armor. When the Serpent Tail were seemingly double-crossed by their employer (having seen the suits, Gai himself had become evidence of their existence), Gai commandeered the empty Blue Frame to defeat them, and after Lowe confronted him in Red Frame, Gai decided to leave Lowe and friends alone. Gai kept Blue Frame for his own use, and the two Astray pilots encountered one another several more times, sometimes as allies, sometimes as enemies. They eventually became friends. 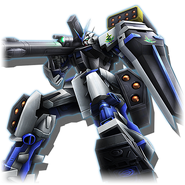 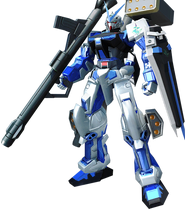 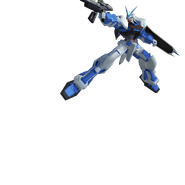 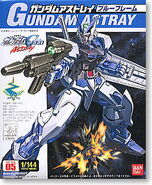