Like MBF-P03 Gundam Astray Blue Frame Second L, the Blue Frame 2nd Revise is armed with six anti-beam coated "Armor Schnieder" combat knives. Four are mounted in the feet as retractable combat knives in the heels and toes, while the remaining two are stored in mounts on the hips. Gai frequently deployed the knives in the feet as weapons during kicks, while the other two knives are used to block beam sabers and even range beam attacks. Blocking range beam attacks using the knives can only be done by pilot as skilled as Gai. The knives are also used in extreme close combat where the Tactical Arms II is unsuitable. Despite the name, these knives are unrelated to the ones used by Strike Gundam.

A significant upgrade over the original Tactical Arms seen on the Blue Frame Second L, the Tactical Arms II remains a multifunctional equipment capable of functioning as a flight pack or a weapon. The newly added Sword Arm and Gatling Arm improves the weapon's versatility in close and ranged combat respectively. Just like the original, it is built by Lowe.

The standard form of the Tactical Arms II, it provides the Blue Frame 2nd Revise with flight capability. By adjusting the position of the folded wing-like components, it can allow the MS to move in an irregular manner, making it difficult for the enemy to aim. The mounted Gatling gun can be used in this form for shooting at pursuing enemy units.

The Tactical Arms II is capable of folding into a 20-meter large sword, which can also function as a shield due to its size. The blade has an incredibly sharp edge and even if it did not damage the enemy’s armor, the impact due to its size can damage internal components or badly rattle the pilot, and may even lead to unconsciousness in serious cases. The sword blades can be split apart to allow the use of the Gatling gun in this form.

A new form of the Tactical Arms II, the blades of the Tactical Arms II detaches from the Gatling gun and are attached to the Blue Frame 2nd Revise's arms. Two energy beams then protrude from the separated halves. Compared to Sword Mode, Sword Arm Mode are more convenient and are often used against melee combat orientated enemy.

Often used by Gai to destroy bases and facilities, the four barrelled 90mm Gatling gun has the highest accuracy when used in this form. In this form, the sword blades are used to make a balancing stand to stabilize the gun while firing, and can also protect the MS from enemy fire as well as serves as heat sinks during prolong shooting. Physical projectiles and beams can be fired from two barrels each, a mix of both is also possible. This form also mounts the additional power pack stored on the Blue Frame 2nd Revise's rear skirt armor.

A smaller, handheld version of the Gatling form, it does not have the blades of the Tactical Arms II. This makes it easier for Gai to fire upon multiple targets but has lower accuracy.

A handheld weapon used by Blue Frame 2nd Revise when it is equipped with Scale System. The rifle is mounted with 6 supercavitating torpedoes for ranged aquatic combat.

Inherited from Blue Frame Second L, it is a two-layer armor system with the PS armor on the inner layer activating only when the outer armor is breached. This design helps to reduce energy consumption. It is installed only around the cockpit so as to keep the MS light and mobile. The Earth Alliance also has the exact same armor system, but the one installed on this suit was independently thought up by Lowe Guele and not a copy of the EA's.

For aquatic mission, the Blue Frame 2nd Revise can be equipped with the Scale System, which is a new version of the one used by the original Blue Frame and incorporates new technologies. The Scale System is a set of armor attached to the suit's exterior, and has numerous tiny scales that vibrate to propel the mobile suit through the water and can also serve as makeshift shield against phonon maser. With these parts, the suit has higher underwater mobility than ZAFT's aquatic MS but the diving depth is relatively limited, since the mobile suit itself is not built to resist high pressures. Additional sensors such as active and passive sonar have also been installed in the suit's head. When equipped with the Scale System, the Tactical Arms II is not equipped as the system includes a back-mounted part.

An upgrade of MBF-P03 Gundam Astray Blue Frame Second L through the use of MBF-P03third Astray Blue Frame Third's data. In Seed Vs Astray, its first battle is against MBF-P05LM Astray Mirage Frame and Gai purposely allow one of the Sword Arm to be destroyed in order to defeat Gina. It later interrupts the battle between MBF-P05LM2 Gundam Astray Mirage Frame 2nd Issue and LG-GAT-X105 Gale Strike Gundam. During the second match against Gina, Gai easily won the battle despite upgrades to Gina's body and his MS. Gai then joins up with Canard and Lowe and proceeded to Librarian Works's home base with ND HE's guidance. They meet Prayer Reverie in the Librarian's base, who subsequently seeks a match against them. Gai, Lowe and Canard then battle Prayer Reverie in his LN-ZGMF-X13A Nix Providence Gundam. Gai and Canard successfully defeats Prayer, who then informs them of Librarian's true goal and what he has been trying to achieve. After discovering Librarian and Prayer's goals, Gai and Lowe encounter Gina once again, and Gai fights him in the final battle while Lowe stands by watching them. The outcome of this battle is unknown. 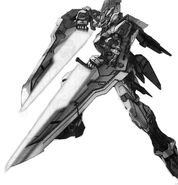 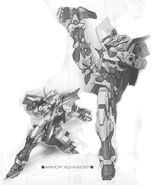 Armor Schneiders in use