Produced in the Ame-no-Mihashira's factory by Gai, the Gundam Astray Blue Frame D is a close combat unit created to battle Dante Gordigiani's MBF-P0X Gundam Astray Noir. Although it is a variant of the Blue Frame Second L and Astray Blue Frame Second G, the Gundam Astray Blue Frame D swaps out most of their parts for parts of the original Blue Frame. Newly designed parts are also fitted in some areas and a striker pack connector has been added to the suit's back so that it can mount the Vouivre Striker, a modified AQM/E-X01 Aile Striker. The suit is armed with 10 blades and gives the impression that it is designed to get close to the enemy using the powerful output from the Vouivre Striker and then engaged in close combat. However, these blades are actually DRAGOONs with unique abilities and most of them can also be used as handheld weaponry. Gai later upgrades the suit with a pair of blade guns that are mounted underneath the arms.

Unlike the DRAGOON System on other MS, the remote-controlled units used by Blue Frame D are in the form of blades of various sizes and designs. The suit stores 10 DRAGOONs all over its body, eight are on the main body and the remaining two are on the Vouivre Striker. These DRAGOONs are created to counter MBF-P0X Gundam Astray Noir's sword pistols, and most of them be can used as handheld weapons when neccessary.

Stored on the side armor when not in use, the pair of sword DRAGOONs are the suit's largest DRAGOON units. As indicated by their name, they can function as handheld swords and thanks to their large size, they can also be used as shields.

Mounted on the head when not in use, the pair of sensor DRAGOONs are the suit's smallest DRAGOON units. As they are equipped with sensors, they can be deployed to collect information or be positioned to see what the enemy units are doing outside of the Blue Frame D's view. They are also fitted with Mirage Colloid detectors and can be used as handheld blades if required.

Stored on the Vouivre Striker, the pair of beam cannon DRAGOONs each have a large central blade and two smaller blades at the sides, as well as a beam cannon with high output but limited number of shots mounted beneath the central blade. These DRAGOONs adopt a paper airplane-like form when deployed. When not in use, the two smaller blades will fold against the large blade. Unlike the other DRAGOONs on the suit, these two DRAGOONs cannot be used as handheld weaponry.

Mounted underneath each arm, this weapon has two gun barrels positioned horizontally next to each other with a blade stored in between. Each of the gun barrels has its own magazine and the types of ammunition fired can vary depending on the magazine used, while the blade is detached and held in hand when in use. The pair of blade guns can also function as DRAGOON platforms, whereby the 10 DRAGOONs can attached and form two large swords known as 'Sipel Swords'.

Inherited from Blue Frame Second L/G, it is a two-layer armor system with the PS armor on the inner layer activating only when the outer armor is breached. This design helps to reduce energy consumption. It is installed only around the cockpit so as to keep the MS light and mobile. The Earth Alliance also has the exact same armor system, but the one installed on this suit was independently thought up by Lowe Guele and not a copy of the EA's.

A custom striker pack used by the Blue Frame D, its main purpose is to allow the suit to accelerate/move in a single direction at the fastest possible speed. Since the Vouivre Striker is basically the Aile Striker with the beam sabers replaced by the beam cannon DRAGOONs, it has better propulsion capability than the Astray Noir's Noir Striker. As it is based on the earlier version of Aile Striker, the Vouivre Striker is not powerful enough to give the suit flight capabilities inside Earth's atmosphere. However, it does allow the suit to glide in the air for a short time and improve its mobility and jumping capabilities. 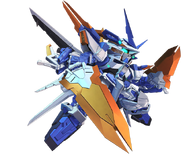