The MBF-P02 Gundam Astray Red Frame with Power Loader is a Mobile Suit in the manga Gundam SEED Astray R.

After forging the 150m long katana,"Gerbera Straight" Vol.2 (commonly referred to as "150 Gerbera Straight"), Lowe built a huge 60 meter tall Power Loader robot for the Red Frame to dock with (inspired by the ZGMF-X09A Justice Gundam and ZGMF-X10A Freedom Gundams' METEOR units), allowing it to wield the large sword properly. The Power Loader is designed to mimick every movement of the docked Red Frame. Due to its immense size, the Loader is split into upper half and lower half for easier storage. It is possible for Red Frame to use the separate halves individually for work purposes, and the lower half can also be operated by Kisato Yamabuki's BuCUE.

Mounted in the Red Frame's head are two "Igelstellung" 75mm multi-barrel CIWS guns. These light projectile weapons can be used to intercept missiles and to destroy lightly armored vehicles.

A mobile suit-sized katana that is extremely sharp, and does not rely on the kinetic energy of a high-speed swing to cut. It is stored in a scabbard mounted on the left side armor.

Formally known as "Gerbera Straight" Vol.2, it is a huge, 150 meters long version of "Gerbera Straight" forged from a large piece of rare metal that Lowe's gang found on earth. Due to its sheer weight, the standard Red Frame cannot wield it effectively. This problem was solved when Lowe created the Power Loader.

The Power Loader was built during the later half of CE 71, specifically for the purpose of allowing Lowe to wield the massive 150 meter long "150 Gerbera Straight". After it was first completed, the Power Loader was immediately put to use to cut a portion of Junius Seven's support shaft in order for the colony's center of balance to be changed and brought under control. The Power Loader was eventually destroyed in combat with the ZGMF-X11A Regenerate Gundam. Using parts supplied by Jean Carry, the Red Frame would be repaired and modified into the MBF-P02 Astray Red Frame "Powered Red". 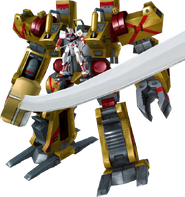 Retrieved from "https://gundam.fandom.com/wiki/MBF-P02_Gundam_Astray_Red_Frame_with_Power_Loader?oldid=429452"
Community content is available under CC-BY-SA unless otherwise noted.