After the MBF-P02 Gundam Astray Red Frame with Power Loader was defeated by ZAFT's ZGMF-X11A Regenerate Gundam, Lowe received a set of new powerful arms from Jean Carry, allowing the Red Frame to become the Powered Red. These new arms incorporated power cylinders, an enhanced drive system developed by Jean, and to support the arms, the Red Frame's shoulders and back frame parts are also strengthened.

As a result of the changes, the Red Frame's beam sabers are removed, but the mobile suit can now wield the "150 Gerbera Straight" without the Power Loader. When used at full power, various parts of the arms open up for improved heat dissipation efficiency. The powerful arms also allow the execution of the "Red Flame" punch, an attack that can damage the internal components of enemy mobile suit, including those with Phase Shift armor.

Eventually, Jean successfully miniaturized the power cylinders, integrating them into the Red Frame's normal arms, enhancing the power of its katana slashes. Although the optional arms are now obsolete, they are still stored aboard the ReHOME and Lowe later upgraded them to be 3 times stronger for the "Festival of Red" event in South America. During the event, Powered Red is also equipped with two Caletvwlchs instead of the "Gerbera Straight" katana.

Mounted in the Red Frame's head are two "Igelstellung" 75mm multi-barrel CIWS guns. These light projectile weapons can be used to intercept missiles, stop enemy units from closing in, etc.

A mobile suit-sized katana that is extremely sharp, and does not rely on the kinetic energy of a high-speed swing to cut. Unlike the normal Red Frame, Powered Red mounts the "Gerbera Straight" behind the left shoulder.

Formally known as "Gerbera Straight" Vol.2, it is a huge, 150 meters long version of "Gerbera Straight" forged from a large piece of rare metal that Lowe and his friends found on earth. Due to its sheer weight, the standard Red Frame cannot weld it effectively. However, the Powered Red has sufficient strength to wield it easily.

The ornamental piece on the "150 Gerbera Straight" [Power]'s pommel that covers the muzzle of the "Lohengrin" cannon, it is capable of generating an "Armure Lumiere" mono-phase lightwave shield when used separately. This shield is handheld when in use, and can also be stored on the Powered Red's back.

A pair of large knuckle duster-like equipment with a movable blade on each end for cutting objects caught in their grip. The two blades on each Gerbera Tool A are retracted when the tools/weapons are stored on the hilt's guard when not in use.

A pair of large pickaxe-like equipment, they are used for tasks like crushing bedrocks. The blade of each Gerbera Tool B is folded into their handle when the tools/weapons are stored on the hilt's guard when not in use.

There is also the full disable mode, whereby the safety limit of the Caletvwlch is disregarded allowing it to fire a dangerously high amount of energy at its target, destroying it in one hit. However, doing this damages the Caletvwlch and renders it unusable.

A powerful punch executed by Power Red, it is typically aimed at the enemy machine's weak spot. The punch is capable of damaging a machine's internal components, even ones protected with phase shift armor, and can send the machine flying back.

Afterwards, Lowe reverted the Red Frame back to its normal form and the arms were left in ReHOME's storage room. Later, Jean developed smaller but just as powerful power cylinders that were integrated into Red Frame's normal arms. Prior to the "Festival of Red", an event in the South America's "Civilian MS Exhibition", Lowe took out the obsolete arms and increased their power by 3 times before fitting them onto the Red Frame together with 2 Caletvwlchs. The event was later disrupted by MWF-JGP99G Gundam Astray Violence Geist and Lowe used the Powered Red to defeat it. 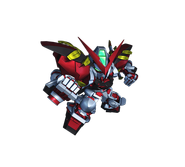