The MBF-P02 Gundam Astray Red Frame is a Mobile Suit in the Gundam SEED Astray series of manga, novel and photonovel. It is operated by Junk Guild member Lowe Guele.

The MBF-P02 Gundam Astray Red Frame is one of five identical prototype mobile suits developed by Orb using stolen data from the Earth Alliance's G Project. Its original concept was to be a MS that could be piloted by Naturals, and it was eventually loaded with an incomplete Natural-use OS. Most of the technology from the G Project is successfully copied with the exception of Phase Shift armor. In its place, the Gundam Astrays' designers made the machines out of a lighter foam metal compound, with minimal armor over the frame. This made the mobile suits lighter and faster than their G Project counterparts. All five prototype Gundam Astrays are also designed with a backpack that can be lowered to the back skirt armor, allowing the mounting of additional equipment on the back.

The Red Frame initially had the same armament as the other prototype Gundam Astrays, consisting of two head-mounted "Igelstellung" 75mm multi-barrel CIWS, two backpack-mounted beam sabers for close combat, a Type 71 beam rifle and a physical shield. Red Frame's pilot, Lowe Guele, eventually acquired another armament - the "Gerbera Straight" katana. To wield this katana effectively, the Red Frame's OS was modified. Lowe also created a 150 meter long version of this sword, however it cannot be carried by the Red Frame in its normal configuration. Lowe also designed a set of upgrades for Red Frame, but they are used to repair Gai's damaged MBF-P03 Gundam Astray Blue Frame instead. When there is a need for flight capability, Red Frame can be fitted with the Flight Unit and when it needs to dive underwater, it can use the Salvage Unit. After his return from Mars, Lowe developed the Caletvwlch and the Ddraig Head. The former is a multifunctional handheld equipment, while the latter is a special head unit designed to complement the former.

Like other mobile suits that use beam weapons, the Red Frame is equipped with hand plugs to exchange energy with weapons the suit carries. Although considered a misuse of the system, the energy from the hand plug can be manipulated into an energy ball and discharged. This is often used by Lowe as an emergency weapon, for example to temporarily blind enemies. The mysterious organization, Librarian Works, later created a copy of the Red Frame. Known as Replica Red Frame, it has the same capabilities as the real Red Frame.

Mounted in the Red Frame's head are two "Igelstellung" 75mm multi-barrel CIWS guns. Although classified as anti air, these light projectile weapons can be used to intercept missiles and to destroy lightly armored vehicles.

Red Frame can use a physical shield for defense, it is mounted on the left forearm and/or handheld. This is the same type of shield as used by Strike and Duel Gundam.

While Red Frame had the same basic armament of the other two Gundam Astray units, Lowe dislikes the high energy requirements of the beam weapons. Therefore, he favors using the "Gerbera Straight", a mobile suit-sized katana given to him by the eccentric old swordsman Un No after Lowe repaired the damaged sword. Unlike the swords used by ZAFT suits like the ZGMF-1017 GINN, the Gerbera Straight is extremely sharp, and does not rely on the kinetic energy of a high-speed swing to cut through its targets.

At one point Lowe acquired head of a TMF/TR-2 BuCUE Tactical Reconnaissance Type at a black-market auction, which he modified and connected to the Red Frame's right hand as a gauntlet-like weapon allowing the Red Frame to use its twin beam saber. The head also stored encrypted reconnaissance data showing the GAT-X133 Sword Calamity.

A customizable multipurpose equipment created by Lowe and mass produced by Junk Guild. The Caletvwlch is meant for cutting and induction welding, but can be used for combat if the limiter is disabled via a voice command. However, doing so would contravene the "prohibition of armed civilian MS" provisions, except when it is used for self-defense. Powered by an internal battery, the Caletvwlch normally consists of two blades (a short 'Build Cutter' and a long 'Build Knife') and a welding torch known as 'Build Torch'. During combat, it can function as a gun (aka G mode, where the Build Torch functions as a beam rifle) or can be reconfigured into a sword (aka S mode).

It also has a scattering device that releases Mirage Colloid particles to help maintain the suit's balance while it moves in mid-air and to allow it to remain stationary in the air with ease. The particles can also create an air current to propel the MS and be used to detect any movements in the surrounding area. An unintended side effect is that the scattered Mirage Colloid particles can disrupt the Mirage Colloid stealth system of nearby MS. There is also the full disable mode, whereby the safety limit is disregarded allowing the Caletvwlch to fire a dangerously high amount of energy at its target, destroying it in one hit. However, this damages the Caletvwlch and renders it unusable.

While staying in Orb, Lowe acquired an MBF-M1 M1 Astray flight pack, and modified it for use with Red Frame. The Flight Unit's wings are actually detachable fuel tanks, and they grant it greater cruising range than the original version. The Flight Unit seems to be attached to the external connector on Red Frame's back and serves only as a supplemental booster as Red Frame's backpack is still present. Thanks to the support from 8, the Flight Unit can be detached and operated as a remote unit.

A diving suit made by Lowe for the Red Frame, the Salvage Unit is created using the exterior of a UMF-4A GOOhN. It has superb resistance to water pressure, which the Red Frame lacks, and hence allows the suit to stay underwater for a longer period. It has three searchlights (one above the head and two on the chest), can deploy a pair of floatation device from the sides for surfacing during an emergency, as well as two manipulator arms as the Red Frame's own arms are hidden underneath. As the "Gerbera Straight" katana is mounted on the back of the Salvage Unit, Red Frame still has some form of combat capabilities when underwater. The first version of the Salvage Unit falls apart whenever it is ejected from Red Frame, Lowe later develops an improved version that remain intact when ejected, allowing for easy re-use.

On January 25, CE 71, ZAFT's attack on Heliopolis to steal the Alliance Gundams also unknowingly interrupted the Astray project. In order hide their progress, Orb's officials decided to destroy the Astray lab. Coordinator Rondo Gina Sahaku, an Orb nobleman, disagreed and attempted to save the three suits, Gold Frame, Red Frame and Blue Frame, that were assembled. He ordered one of his subordinate to split all the Astray data among the three and Red Frame was uploaded with the incomplete Natural-use OS. This proved fortunate for Junk Guild merchant/technician/pilot Lowe Guele, who discovered Red Frame (as well as Blue Frame and Gold Frame's discarded right arm) shortly afterward, while searching the remains of Heliopolis for valuable salvage. Lowe initially clashed with Gai Murakumo of the Serpent Tail mercenary company, who had been hired to eliminate all evidence of the Astray program, but the two joined forces when Gai's employer seemingly double-crossed him; having seen the mobile suits, Gai himself had become evidence of the program's existence. Gai took control of Blue Frame, and the two Astray pilots encountered one another several more times, sometimes as allies and sometimes on opposing sides. They soon became friends and when Gai's MBF-P03 Gundam Astray Blue Frame was damaged during a battle with the Socius clones, Lowe readily offered the use of Red Frame's new upgrade parts to repair the damaged MS. On one of his earliest missions, he encountered the Silverwind under attack from a Nelson-class battleship, and diverted their attack long enough for Lacus Clyne to escape.

Many people and groups attempted to steal Red Frame from Lowe, but his combination of resourcefulness and luck caused these attempts to all fail. The most notable was by Orb test pilot Juri Wu Nien, undercover as Junk Guild technician recruit Marlin, who briefly took control of Red Frame in an attempt to test its Natural-use OS. In the process, she and Lowe accidentally discovered that energy discharged from the Red Frame's hand plugs could be utilized as a make-shift weapon, and it was used to destroy the sensors of another mercenary mobile suit that had come to take Red Frame. Lowe later put this misuse of the system to good use in a battle with Gold Frame pilot Rondo Ghina Sahaku, using it as a last-ditch weapon to destroy Gold Frame's head but the attack also damaged Red Frame's arm. Fortunately, Lowe still had Gold Frame's discarded arm from the Heliopolis factory, and used it as a replacement. He then brought Red Frame to Orb, where it was fully repaired at the Morgenroete headquarters. Lowe also bought the severed head of a TMF/TR-2 BuCUE Tactical Reconnaissance Type at a black market auction and mounted it on Red Frame's right arm to utilize the head's double-bladed beam saber. However, this unusual weapon was lost almost immediately afterward during a ZAFT attack.

After getting repaired at Morgenroete, Lowe would use the Red Frame to aid in the construction, and then defend the Giga-Float mass driver from attack until it was complete. Afterward the Red Frame would be taken back into space where Lowe would use it, alongside Gai's MBF-P03 Gundam Astray Blue Frame, to battle Rondo Ghina Sahaku's MBF-P01-ReAMATU Gundam Astray Gold Frame Amatsu, resulting in the latter's death.

After leaving for Mars, Lowe created the "Mars Jacket" armor for his Red Frame, with which the suit was still equipped after it returned to the Earth Sphere. It was here that the suit was stolen by Deago Lowell, a Mars colonist who came back with Lowe. Deago used the Mars Jacket Red Frame during the "Break the World" terrorist attack of October CE 73, where it used one of its katanas to slice apart pieces of Junius Seven in an effort to reduce the damage caused as they fell to Earth. Deago eventually returned the stolen suit, with Lowe afterwards transferring the "Mars Jacket" armor to an MWF-JG73 Civilian Astray JG Custom.

In Mobile Suit Gundam SEED VS Astray, another Red Frame was deployed by Librarian Works and piloted by the Carbon Human version of Un'no. This replica Red Frame was built by the organization from scratch, and its power and abilities are exactly the same as the real Red Frame. Lowe's Red Frame was later damaged by the Librarian Works's LN-GAT-X207 Nebula Blitz Gundam, piloted by Lily Thevalley. After this, the unit is repaired and upgraded into the MBF-P02 Gundam Astray Red Frame Kai using the Tactical Arms IIL as its standard weapon. 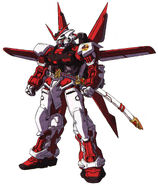 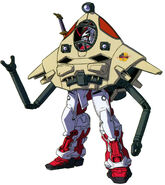 Equipped with Caletvwlch and Flight Unit 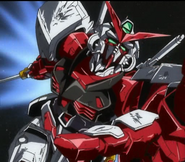 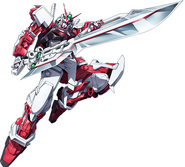 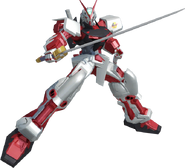 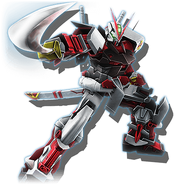 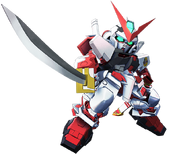 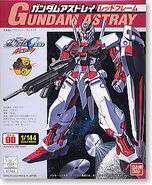 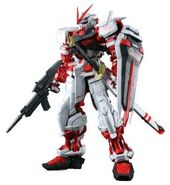