The MBF-P02 Gundam Astray Red Dragon is a modification of the Astray Red Frame with Flight Unit and is equipped with three Caletvwlchs and the Ddraig Head. The Caletvwlchs are multifunctional handheld equipment with Mirage Colloid scattering devices that can provide the suit with various abilities. They are also the reason for the suit's name as their placement on the Flight Unit caused them to resemble a dragon's wings and tail. The Ddraig Head is a special head unit designed to complement the Caletvwlchs, and can improve the suit's ability to control the Mirage Colloid particles around it. Other than these two new equipment, the Red Dragon also retains the "Gerbera Straight" Katana and beam sabers, and like the normal Red Frame can manipulate the energy for its beam weapon into an energy ball that is discharged from the hand plugs.

Red Dragon is equipped with two beam sabers for close combat, they are located on the Red Frame's backpack which is lowered to the waist when the Flight Unit is equipped.

A mobile suit-sized katana given by the eccentric old swordsman Un No after Lowe repaired the damaged sword. Unlike the swords used by ZAFT suits like the ZGMF-1017 GINN, the Gerbera Straight is extremely sharp, and does not rely on the kinetic energy of a high-speed swing to cut through its targets. It also does not consume lots of energy like the beam sabers.

There is also the full disable mode, whereby the safety limit of the Caletvwlch is disregarded allowing it to fire a dangerously high amount of energy at its target, destroying it in one hit. However, doing this damages the Caletvwlch and renders it unusable. The Red Dragon has three Caletvwlchs stored on the Flight Pack, and their Mirage Colloid control capabilities are drastically improved due to synergistic effects.

While staying in Orb, Lowe acquired an MBF-M1 M1 Astray flight pack, and modified it for use with Red Frame. The Flight unit seems to be attached to the external connector on Red Frame's back and serves only as a supplemental booster as Red Frame's backpack is still present. In the Red Dragon form, the Flight unit is modified to allow the mounting of three Caletvwlch units.

An argument then broke out when Valerio Valeri and Lowe were celebrating their victory, and this led the former to challenge the latter to a duel, which occured a week later on Earth. As the duel was about to start, Lowe was informed by Valerio Valeri that he had to defeat the Blau Calamity Gundam, Gelb Raider Gundam and Rot Forbidden Gundam in a 3v1 battle before he could challenge him and his Turn Red. Lowe managed to accomplish this seemingly impossible task by using Red Dragon's three Caletvwlchs in full disable mode, defeating the trio of Gundams at the cost of the three Caletvwlchs. During the duel with Turn Red, the Ddraig Head was destroyed by Valerio Valeri but Lowe also managed to destroy one of Turn Red's Tactical Arms. Confident of his victory, Valerio Valeri discarded Turn Red's other Tactical Arms and explained that the victory would not truly be his if he obtained it using the weapon. He also allowed Lowe to repair the damaged head, which Lowe did by using the Red Frame's original head he had brought along. The duel later restarted and turned into a punching contest to see which MS is better. In the end, Lowe managed to knock out Valerio Valeri by launching a powerful 'Red Flame' punch and the Turn Red's Combat AI, 80, surrendered on the latter's behalf. 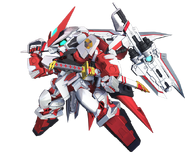