The Astray Red Frame Kai is the upgraded version of the MBF-P02 Gundam Astray Red Frame developed and piloted by Lowe Guele. It first appeared in the photo series Mobile Suit Gundam SEED VS Astray.

An upgraded form of MBF-P02 Astray Red Frame developed by Lowe after his first encounter with LN-GAT-X207 Nebula Blitzs, the major change to the suit is the replacement of the Red Frame's backpack with Tactical Arms IIL and its mount. Besides the two head-mounted "Igelstellung" 75mm multi-barrel CIWS, Tactical Arms IIL and "Gerbera Straight" katana, Red Frame Kai is also equipped with "Tiger Pierce" Katana. It no longer uses the physical shield and the beam torch component of Tactical Arms IIL replaces the Type 71 beam rifle.

Other than these different forms, Tactical Arms IIL can also function as "Maga no Ikutachi" Energy Absorption Claw and as a DRAGOON. The beam torch component can be detached and used as a welding tool or a beam rifle by adjusting its output. Tactical Arms IIL is a product of all Lowe's knowledge however its multiple forms and functions also increases the chance of it malfunctioning and make its maintenance difficult.

As with the other Orb Astray prototype, the Red Frame Kai is equipped with two head-mounted "Igelstellung" 75mm multi-barrel CIWS for intercepting missiles, stopping enemy units from closing in, etc.

A mobile suit-sized katana given to him by the eccentric old swordsman Un No after Lowe repaired the damaged sword. Unlike the swords used by ZAFT suits like the ZGMF-1017 GINN, the Gerbera Straight is extremely sharp, and does not rely on the kinetic energy of a high-speed swing to cut through its targets.

Like the "Gerbera Straight", the Tiger Pierce is also an extremely sharp mobile suit-sized katana, and does not rely on the kinetic energy of a high-speed swing to cut through its targets. Originally equipped on Un No's GINN, it somehow falls into the hands of Librarian Works and is used by the replica Red Frame. Carbon Human clone of Un No later left it for Lowe.

Manufactured by Lowe alongside MBF-P03R Gundam Astray Blue Frame 2nd Revise's Tactical Arms II, but he did not equip it on Red Frame until the upgrade. It serves as Red Frame Kai's booster pack as well as its close combat and long ranged weapon by changing into the appropriate form. Unlike the Tactical Arms II, Tactical Arms IIL is equipped with a removable beam torch instead of a gatling gun. The beam torch is usually used for cutting and welding, but by adjusting the output of the central beam generating device, it can also be used as beam rifle. It also serves as the handle of the Tactical Arms II during Sword and Arrow form.

The basic form of Tactical Arms IIL when it is mounted on Red Frame Kai's back, it allows quick transformation into other forms.

A form where the weapon transforms into wings, providing the Red Frame Kai with flight capability. By adjusting the position of the Tactical Arms IIL's folded components, the MS can move in an irregular manner, making it difficult for the enemy to aim. In this form, the mounted beam torch can be used to fire at enemy units in front of Red Frame Kai. The beam torch can also be separated and used on its own without affecting the flight form.

The close combat weapon form of the Tactical Arms IIL, it is handheld when in used and can also function as a shield due to its large size. The blade has an incredibly sharp edge and even if it did not damage the enemy’s armor, the impact due to its size can damage internal components or badly rattle the pilot, and may even lead to unconsciousness in serious cases. The Tactical Arms IIL can be mounted on the Red Frame Kai's back when in this form, but it serves no practical purpose other than looking cool.

The bow-like, ranged weapon form of the Tactical Arms IIL, it is handheld when in used and fires a beam arrow. In this form, the Voiture Lumiere System can be deployed to manipulate the path of the beam arrow. Has a 'Short Mode' and 'Long Mode' depending on whether the Arrow Form's "bow arms" are folded or unfolded.

The form in which the Tactical Arms IIL is used as a giant pincer for moving and cutting large objects. It is mounted on the arm when in use and can also be used during combat. The beam torch is used separately.

A modified "Maga no Ikutachi" Energy Absorption Claw developed by Lowe is also installed in the Tactical Arms IIL, it is 10x stronger than normal version and manages to disable three LN-GAT-X207 Nebula Blitzs easily. It seems to be able to function without physical contact, something the normal version failed to do. Although Lowe also included the DRAGOON System into Tactical Arms IIL, he cannot use it by himself but he can lend it to someone who can.

Inherited from MMF-JG73L ∇, it is used for propulsion purpose when the Tactical Arms IIL transform into Delta form, and has 2 different modes of operations. In the first mode, the system converts the energy from an internal laser into a strong light pressure which is then used as thrust, and this grants the suit a speed boost. However, Red Frame Kai is unable to use it at full power as that would require a nuclear engine and Lowe has no plans of ever installing one. In the second mode, the system form a membrane made of light within the upside down triangle form by the Tactical Arms IIL, which then capture and converts the energy within solar winds or a power beam into a strong light pressure for propulsion purpose.

"Voiture Lumiere" system can also be activated in Arrow form but not for propulsion; instead the "Voiture Lumiere" field created can be used to detect invisible enemy units and their movements. Furthermore, the field also allows curving of the beam arrow fired and can even alter the arrow's path, giving the weapon a theoretical 100% accurarcy. However this requires superior piloting skills and even Lowe cannot bring out its full potential.

Lowe was forced to upgrade his MBF-P02 Astray Red Frame after losing to Librarian Works's LN-GAT-X207 Nebula Blitzs. He proceeds to equipped Red Frame with Tactical Arms IIL that was manufactured some time ago and the "Tiger Pierce" katana that the Carbon Human clone of Un No left behind. At around the same time, Ergnes Brahe visited Lowe to have his MMF-JG73L Turn Δ repaired after a battle with Librarian Works. Learning that they are facing the same enemy, Ergnes donated Turn Δ's "Voiture Lumiere" system to Lowe so that he can upgrade his Red Frame further.

Red Frame Kai's first battle was against the Nebula Blitz Gundams that have been dispatched again to fight him. Using the MS's new abilities, Lowe figures out Nebula Blitz's teleportation trick and damaged one of the Gundams. Later, Red Frame Kai was deployed to help the defected Lily and Elijah fight against 3 Nebula Blitz. Using its strengthened "Maga no Ikutachi" Energy Absorption Claw, it easily disables the 3 MS in no time. During the battle with the Supreme Librarian's Nix Providence, Red Frame Kai did not carry out any attacks and was just dodging the attacks from the DRAGOONs. By that time, Lowe had already know that the Carbon Human clone of Prayer was dying soon. Red Frame Kai later blocked a fatal attack from Dreadnought H against the Nix Providence and Lowe explains Prayer's condition to the rest. 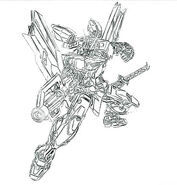 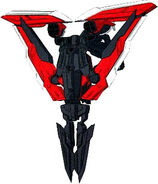 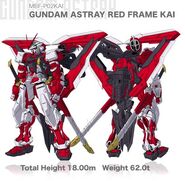 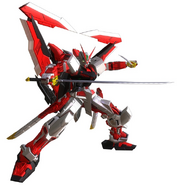 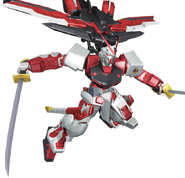 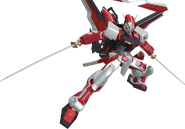 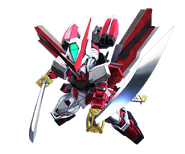