After being heavily damaged by the Red Frame in battle, the Gold Frame was taken to Morgenroete for repair and upgrades. One of the most obvious visual distinctions between the base Gold Frame and the Gold Frame Amatsu is the latter's black armor, and the equipping of a new head unit with a secondary, mono-eye sensor.

Additionally, two unique weaponry are mounted on the suit's new backpack: the "Maga no Ikutachi" energy absorption blade and the "Magashira no Hoko" shot lancers. The "Maga no Ikutachi" energy absorption blade is designed to absorb energy from an enemy mobile suit, making it highly effective when the majority of mobile suits are powered by batteries. The only problem is that the weapon requires physical contact, but this weakness is covered by the mirage colloid which allows the Gold Frame Amatsu to approach a target unseen. The "Magashira no Hoko" shot lancers are penetrating weapons mounted on cables and housed in the "Maga no Ikutachi". With this new backpack, the Gold Frame's back-mounted beam sabers are omitted. The Gold Frame Amatsu can also use the rail bazooka that the original Gold Frame took from Heliopolis.

Mounted in the Gold Frame Amatsu's head are two "Igelstellung" 75mm multi-barrel CIWS guns. These light projectile weapons are classified as Anti Air and can be used to intercept missiles, damage enemy unit's sensor or to destroy lightly armored vehicles

One of the most unique weaponry of the Gold Frame Amatsu is the set of backpack-mounted, claw-shaped "Maga no Ikutachi" energy absorption blade. The blade forcefully discharges the electrical energy from the batteries of enemy mobile suits through the use of mirage colloid related technology, disabling them while at the same time recharging Gold Frame Amatsu's own battery. During the design phase, it was meant to be a non-contact weapon that releases colloid particles to cover the area surrounding the Amatsu and affecting enemy units that stepped into this field. This system however prove to be technically challenging and is installed on the Gold Frame Amatsu while still incomplete, necessitating physical contact between the weapon and the enemy unit.

A pair of spear-like weapon housed in the "Maga no Ikutachi" Energy Absorption Blade. The "Magashira no Hoko" shot lancers are shot out on a cable each, and the tip of each lancer is equipped with Phase Shift Armor which activates at the moment of impact for greater penetrating power. The cables also supply power to the lancers and for recovery after use. Additionally, thanks to the high piloting skill of Rondo Gina Sahaku, the cables can also be used to alter the weapon's trajectory,

Modified version of the "Trikeros" system that was recovered along with the right arm of the Blitz Gundam. Like the original, the "Trikeros Kai" is armed with the triple "Lancer Dart" hypervelocity kinetic energy penetrator, a beam rifle and a beam saber. However, the beam saber function has been incorporated into the beam rifle, and a beam blade can now be emitted from the rifle's barrel. The outer edges of the shield is also sharpened, and usable as a melee weapon.

A projectile weapon that uses electromagnetic forces to launch the projectile. It is originally developed for the Duel Gundam.

A pair of beam sabers mounted on the backpack of the incomplete Gold Frame Amatsu.

The incomplete Gold Frame Amatsu is equipped with the same "Trikeros" Offensive Shield System as the Blitz Gundam on its right forearm.

Since the original head of the Gold Frame was damaged, a new head is attached to the suit which includes an additional enhanced sensor.

This feature is only limited to the right arm as it originated from Blitz Gundam.

The Mirage Colloid stealth system is added to the suit thanks to the severed Blitz's arm and subsequently applied to the entire body, allowing the suit to disappear from both visual and sensor detection. The original white armor was painted black to improve the effectiveness of the stealth system.

After sustaining heavy damage from atmospheric re-entry and battle against Lowe Guele in his MBF-P02 Astray Red Frame, the Gold Frame was taken to the Morgenroete facility at Onogoro Island, where it was completely overhauled. Also additional weaponry was added to the suit, which, together with the overhaul, caused it to be designated Gold Frame Amatsu. The suit was again piloted by Orb nobleman Rondo Gina Sahaku, who used it in his plans to strengthen Orb's position in the Earth sphere, while at the same time weakening both the Earth Alliance and the PLANTs.

The unit was initially planned to be the MBF-01 Gundam Astray Gold Frame Amatsu Perfect Form. While only 70% completed, Gina used the Gold Frame Amatsu to attack the Giga-Float mobile Mass Driver, but his attack was repulsed by Lowe Guele and Gai Murakumo. One June 18, Gina, together with two GAT-X133 Sword Calamity units, attacks the ZAFT controlled Victoria Base, with his strike force playing an important role in the Earth Alliance victory in this battle. It received its final upgrades at Ame-no-Mihashira. 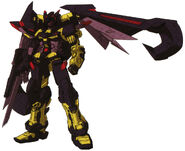 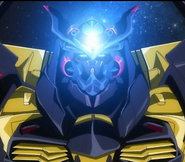 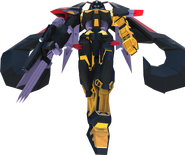 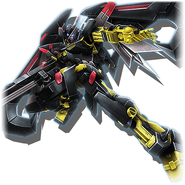 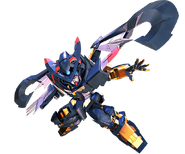