Gundam Astray Gold Frame Amatsu Mina is the repaired, upgraded version of the MBF-P01-ReAMATU Gundam Astray Gold Frame Amatsu. Initially the suit's outward appearance did not differ much from its predecessor, it just has two new weapons: a pair of physical "Totsuka no Tsurugi" sabers stored on the side skirt armors, and a retractable "Tsumuha no Tachi" claw mounted on the left forearm. However, an incident during its operation test led to the suit having additional armor on the legs and new feet.

Internally, changes were made to suit Mina's use, and this resulted in approximately 30% improvement in specifications. The Amatsu Mina is capable of atmospheric flight, as evidenced when it was used to defend a town from ZAFT forces (A girl who witnessed the incident described the MS as a "black angel"). However, it is unknown if this is a new ability or inherited from Gold Frame Amatsu as only the incomplete version of Amatsu is ever used on earth.

In CE 73, Yoon Sefan developed the "Okitsu no Kagami" equipment to bolster the Amatsu Mina's defensive capability. When equipped, the "Okitsu no Kagami" replaces the claw on the left forearm. The beam shield generated by this new system can also form a beam blade, and can be used to attack enemy units in various ways.

The same set of back-mounted, claw-shaped weapon as used by the original Gold Frame Amatsu. It forcefully discharges the electrical energy from the batteries of enemy mobile suits through the use of mirage colloid related technology, disabling them while at the same time recharging Gold Frame Amatsu Mina's own battery. Like the original Gold Frame Amatsu, contact with the enemy unit is necessary for this weapon to function. Later at an unknown point of time, the weapon is improved, allowing it to function as a non-contact weapon as it was original envisioned.

Like the original Gold Frame Amatsu, the Amatsu Mina is equipped with a pair of spear-like weapon known as "Magashira no Hoko" housed in the Maga no Ikutachi" Energy Absorption Blade. These shot lancers are shot out on a cable each, and the tip of each lancer is equipped with Phase Shift Armor which activates at the moment of impact for greater penetrating power. The cables also supply power to the lancers and for recovery after use. Additionally, thanks to the high piloting skill of Rondo Mina Sahaku, the cables can also be used to alter the weapon's trajectory,

Inherited from the original Gold Frame Amatsu, the "Trikeros Kai" is armed with the triple "Lancer Dart" hypervelocity kinetic energy penetrator, and a beam rifle that can also function as a beam saber by emitting a beam blade from the rifle's barrel. The sharp outer edges of the shield is usable as a melee weapon.

One of the new melee weapons added during the upgrade from Gold Frame Amatsu to Gold Frame Amatsu Mina, it is mounted on the left forearm. The claw has three blades that extend when in use, where they are used for one of two purposes - 1) stop or rob the enemy's weapon, 2) unbalance or stop part of the enemy's movement. Overall, the claw is meant to neutralise the enemy's attack while dealing little damage.

The second new melee weapon added when Gold Frame Amatsu was upgraded to Gold Frame Amatsu Mina. Stored on the side skirt armor when not in use, the pair of "Totsuka no Tsurugi" sabers are shaped like rapiers and are unsuitable for slashing attacks. Instead, they are meant for pinpoint piercing attack to the joints and sensors of enemy MS. As a result, they require a high degree of skill to use effectively. When used properly, they can immobilize the enemy while dealing minimal amount of damage.

As implied by its name, the main function of the "Okitsu no Kagami" is to generate a beam shield. The beam shield was developed from "Armure-Lumiere" Lightwave Barrier technology, and can be changed into a beam blade for offensive use, granting the suit the ability to switch between defense and offense quickly. The beam emitter is mounted on a long movable pole that ends in four rocket thrusters, this allows the beam blade to have a longer reach and higher penetrating power when the thrusters are activated. Furthermore, the beam emitter can be fired and recovered through a cable, extending the reach of the weapon and allowing it to be used like a whip. When the "Okitsu no Kagami" is equipped, it replaces the "Tsumuha no Tachi" claw.

This system is inherited from Gold Frame Amatsu and allows the suit to disappear from both visual and sensor detection.

An additional, ZAFT inspired sensor mounted in the head.

This feature is only limited to the right arm as it originated from the Blitz Gundam.

After the death of Rondo Gina Sahaku, his twin sister Rondo Mina Sahaku recovered his damaged Gundam Astray Gold Frame Amatsu and repaired and upgraded it with the "Tsumuha no Tachi" claw as well as the "Totsuka no Tsurugi" sabers. During an operation test, the suit's legs were destroy by the ZGMF-X11A Regenerate Gundam, leading to the installation of additional leg armor and new feet, culminating in the current look of the Gundam Astray Gold Frame Amatsu Mina.

In October CE 73, during the "Break the World" incident, Mina and her suit met up with the Junk Guild at GENESIS Alpha, with the intention to help them prevent the drop of Junius Seven's wreckage. When the station is attacked by the ZGMF-X12A Testament Gundam, the suit was borrowed by professional MS pilot, Kaite Madigan to assist his friend, Jess Rabble in battle. The Gold Frame Amatsu Mina and Testament briefly fought, until the Testament was driven away by the arrival of the ReHOME. 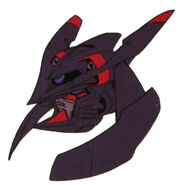 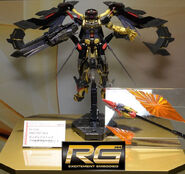