Mounted on the suit's head, the pair of CIWS are for shooting down incoming missiles and enemy units at close range.

A custom beam rifle used by the suit, its unique name is because it stores a dual bladed beam sword, which is also known as a beam naginata, at the top.

A close combat beam weapon that is handheld when in use. It can emit beam blades from both ends and can be spun at a high speed to act as a makeshift shield.

A pair of large physical swords are stored on the back-mounted binders and handheld when in use. These swords are similar in design to the "Gerbera Straight" katana and presumably just as sharp.

A pair of beam cannons are mounted in the narrow end of the backpack binders. The beam cannons provide the suit with additional ranged weaponry and presumably can flip forward when in use.

The Mars Jacket can protect itself using a pair of beam barriers, which are actually just beam shields. The beam barrier is generated from a detachable emitter that is mounted on the back of each forearm. 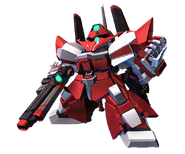 Retrieved from "https://gundam.fandom.com/wiki/MBF-JG73MJ_Mars_Jacket?oldid=496196"
Community content is available under CC-BY-SA unless otherwise noted.