The MBF-02+EW454F Strike Rouge Ootori is a variant of MBF-02 Strike Rouge and was exclusively featured in the Mobile Suit Gundam SEED Destiny HD Remaster. It is primary piloted by the Princess of Orb, Cagalli Yula Athha.

The Strike Rouge Ootori is the Strike Rouge equipped with the multi-purpose EW454F Ootori Striker striker pack, which Morgenroete Inc. has been developing since the first war. The Ootori Striker is based on the P202QX IWSP (Integrated Weapons Striker Pack) and is also meant to allow a MS to handle various situations without changing equipment. However, it has a simpler structure leading to better reliability and ease of maintenance.

Compared to the Aile Striker, Ootori Striker's flight system is a vast improvement as it is capable of powered flight in the atmosphere. The pack is equipped with a beam launcher, railgun, large anti-ship sword, missile launcher and several wing-mounted missiles. The droptanks on the bottom wings contain a stealth support system that utilizes mirage colloid but not much detail is known. In addition, the Ootori Striker can transform into its fighter mode and function as an independent unit when it is separated from the Strike Rouge.

Stored in the Strike Rouge Ootori's side skirt armor is a pair of folding "Armor Schneider" combat knives. These knives do not need power from the suit, can be thrown, and their blades vibrate at high speed allowing them to pierce through most armor except PS armor.

The Strike Rouge Ootori's primary ranged weapon, the beam rifle can be stored on the side skirt armor. It can easily destroy most mobile suits with one shot, or heavily damage warships with several shots, but is mostly ineffective against suits with anti-beam coating. It has an additional handle that can shift to the side, and is often used for extra stability when the Strike Rouge Ootori is firing its rifle rapidly.

A piece of equipment that increase the Strike Rouge Ootori's defensive capability, it is mounted on the left forearm and/or handheld. The shield does not have phase shift armor, so it is not as durable as the Strike Rouge's body armor, however it also does not drain energy each time it is hit. The shield's major advantage is that it is anti-beam coated and can block or deflect beam weapon attacks, against which phase shift armor is ineffective.

Mounted on the lower right of the Ootori Striker, the beam launcher is the suit's most powerful ranged beam weaponry and is positioned under the right shoulder when in use.

Mounted on the lower left of the Ootori Striker, the railgun fires a solid projectile that is accelerated via electromagnetic field. It is positioned under the left shoulder when in use.

The Strike Rouge Ootori is equipped with a large anti-ship sword as its primary close combat weapon. It is a large physical sword that has a laser blade along the cutting edge and is stored on the right side of the Ootori Striker when not in use.

The missile launcher is mounted on the left side of the striker pack and can be switched with other equipment, such as machine cannon, electronic warfare system, etc.

Two sets of three small missiles are mounted on each of the bottom wings. They can be launched all at once for a missile barrage.

The key feature of the Strike Rouge, like the Strike before it, is its ability to equip additional equipment in the form of striker packs. Each striker pack is designed to outfit the MS with the equipment needed to fulfill specific combat roles with maximum efficiency.

When the suit is used by Kira, it is equipped with a large booster unit to help it leave orbit.

The Ootori Striker was developed by Morgenroete Inc. at the same time as the Strike Rouge, but was not deployed in the First Alliance-PLANT War due to difficulties in the development process. It was equipped on the Strike Rouge and first fielded in CE 73, when Cagalli Yula Athha tried to convince the Orb forces to disarm. Cagalli later sortied with the Strike Rouge Ootori during the Battle of Dardanelles and Crete in unsuccessful attempts to convince Orb forces to stand down. It sortied again at the Battle of Berlin, defending fleeing civilians from the GFAS-X1 Destroy Gundam. Cagalli then piloted the unit without the Ootori Striker one final time where she rescued her brother, Kira Yamato, after his ZGMF-X10A Freedom Gundam was destroyed. 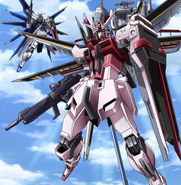 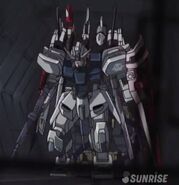 Flying away from Archangel

From Extreme Vs. Maxi Boost 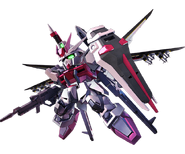