The MBF-02+AQM/E-X03 Launcher Strike Rouge is a variant of the MBF-02 Strike Rouge that appears in the Gundam Fix Figuration series designed by Hajime Katoki.

An early configuration concept for the Strike Rouge during its development, in which it is equipped with the AQM/E-X03 Launcher Striker of the original GAT-X105 Strike Gundam. The Launcher Strike Rouge is specialized for long range bombardment and capable of taking down fortresses and heavily armored targets. Besides the armament mounted on the Strike Rouge itself, the Launcher Striker adds the hyper impulse cannon and a combo weapons pod, which contains a 120mm anti-ship vulcan gun and two 350mm gun launchers, to the armament of the suit. Due to the suit's power extender, the unit can operate for longer periods in battle.

Stored in the Strike Rouge's side skirt armor are a pair of folding "Armor Schneider" combat knives. These knives do not need power from the suit, can be thrown, and their blades vibrate at high frequencies to pierce through most armor except PS armor.

The primary weapon of the Launcher Strike Rouge, it is a large beam cannon with a total length of about 20m. It generates highly-compressed critical plasma energy in the order of microsecond burst impulses and fires them, easily destroying a mobile suit in one shot and blasting a hole through a space colony's wall. Although its energy consumption is high, repeated firing for an extended period of time is possible by connecting to an external power supply. It is mounted on the left side of the backpack via an arm unit, and held under the left shoulder when in use.

The secondary weapon of the Launcher Strike Rouge, it is a close range, defensive, composite armament unit consisting of a 120mm anti-ship vulcan gun and two 350mm gun launchers. It is mounted on the right shoulder and can lock onto multiple targets simultaneously. The 120mm anti-ship vulcan gun is effective in intercepting MS at close-mid range and can also be used for anti-ship combat. As for the 350mm gun launchers, they are missile launchers, but can also fire a variety of projectiles including grenades.

Although the Launcher Strike Rouge is included in the design draft of the Strike Rouge, it is never adopted. 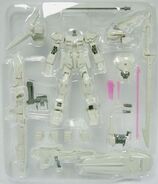 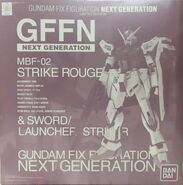 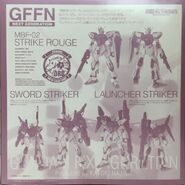 Retrieved from "https://gundam.fandom.com/wiki/MBF-02%2BAQM/E-X03_Launcher_Strike_Rouge?oldid=457219"
Community content is available under CC-BY-SA unless otherwise noted.