Stored in the Strike Rouge's side skirt armor is a pair of folding "Armor Schneider" combat knives. These knives do not need power from the suit, can be thrown, and their blades vibrate at high speed allowing them to pierce through most armor except PS armor.

Stored in the Aile Striker is a pair of beam sabers. These are the primary close combat weapons and can slice through any armor that does not have an anti-beam coating.

Aile Strike Rouge's primary ranged combat weapon, it can be stored on the side skirt armor. The beam rifle can easily destroy a ZGMF-1017 GINN with one shot, but is mostly ineffective against suits with anti-beam coating. It has an additional handle that can shift to the side, and is often used for extra stability when the Aile Strike Rouge is firing its rifle rapidly.

A piece of equipment designed to increase the Strike Rouge's defensive capability, it is mounted on the left forearm and/or handheld. The shield does not have phase shift armor, so it is not as durable as the Strike Rouge's armor, however it also does not drain energy each time it is hit. The shield's major advantage is that it is anti-beam coated and can block or deflect beam weapon attacks, against which phase shift armor is ineffective.

In Seed Destiny, the Aile Strike Rouge is equipped with a large booster unit to help the suit leave orbit.

While rebuilding the Strike Gundam that was badly damaged outside the territory of the Orb Union, substantial spare parts enough to build another Strike were produced. These parts were later loaded onto the Kusanagi and assembled into a Strike variant, called the Strike Rouge, during the last days of the First Alliance-PLANT War. It was piloted by Cagalli Yula Athha, who used the suit for a short time during the Second Battle of Jachin Due on 26 September, CE 71.[1] Among her actions was the rescue of Athrun Zala, who detonated his suit inside ZAFT's superweapon GENESIS to prevent it from firing on Earth.[2]

The Aile Strike Rouge remained operational even during the Second Alliance-PLANT War, and was used as Cagalli's personal mobile suit after she and the crew of the Archangel left Orb. She launched in her suit several times to convince the Orb forces not to fight against the ZAFT ship Minerva, although with little success. Later, the Aile Strike Rouge was modified to Kira's specifications and launched into space with the help of an attached booster, and used briefly to protect the Eternal.[3] The Aile Strike Rouge however, was no match against ZAFT's newer and more powerful mobile suits and was heavily damaged in this battle.[3] With both of its pilots equipped with newer and more powerful mobile suits, the Aile Strike Rouge did not see battle again and it remains questionable if it was ever repaired or simply decommissioned.

Rear (To a Future that Never Ends, HD Remastered)

At the end of the first war (To a Future that Never Ends, HD Remastered)

Strike Rouge (Kira's color) in front of the Eternal (Kira of the Skies, Original) 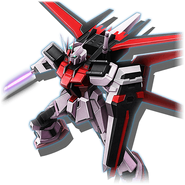