The MBF-01 Astray Gold Frame Amatsu Perfect Form is a Mobile Suit in Gundam SEED Astray. It however never appeared in the manga itself, but only in model kit manual and in books.

The original design of MBF-P01-ReAMATU Gundam Astray Gold Frame Amatsu, but it was never manufactured as Rondo Gina Sahaku wanted the repairs to Gold Frame to be completed as soon as possible. It is equipped with Phase-Shift armor and Mirage Colloid Stealth System that Morgenroete Inc. obtained from analyzing the severed GAT-X207 Blitz Gundam's arm. Unlike the Gold Frame Amatsu that is eventually deployed, Gold Frame Amatsu Perfect Form is constructed using completely new parts and for this reason, the 'P' in the model code (which stands for 'Prototype') has been removed. Gold Frame Amatsu Perfect Form is armed with two head-mounted CIWS, "Maga no Ikutachi" energy absorption blade and the "Magashira no Hoko" shot lancers. It is unknown if it is equipped with "Trikeros Kai" offensive shield system or what handheld weapon it is supposed to use, as the design revealed thus far did not show any of these.

One of the most unique weaponry of the Gold Frame Amatsu Perfect Form is the set of backpack-mounted, claw-shaped "Maga no Ikutachi" energy absorption blade. The blade forcefully discharges the electrical energy from the batteries of enemy mobile suits through the use of mirage colloid related technology, disabling them while at the same time recharging Gold Frame Amatsu Perfect Form's own battery. During the design phase, it was meant to be a non-contact weapon that releases colloid particles to cover the area surrounding the Amatsu Perfect Form and affecting enemy units that stepped into this field. This system however prove to be technically challenging and in its incomplete state, requires physical contact between the blade and the enemy unit.

A pair of spear-like weapon housed in the "Maga no Ikutachi" Energy Absorption Blade. The "Magashira no Hoko" shot lancers are shot out on a cable each, and the tip of each lancer is equipped with Phase Shift Armor which activates at the moment of impact for greater penetrating power. The cables also supply power to the lancers and for recovery after use.

After sustaining heavy damage from the battle against Lowe Guele in his MBF-P02 Gundam Astray Red Frame, the Gold Frame was taken to the Morgenroete facility at Onogoro Island, where it was completely overhauled. Also additional weaponry was added to the suit, which, together with the overhaul, caused it to be designated Gold Frame Amatsu.

This design is supposed to be the original form of the Astray Gold Frame Amatsu, but because Gina wanted to attack the Giga-Float Mass Driver, the MS was launched when the modification was only 70% complete and fitted with recycled modified parts instead of completely new ones. The incomplete unit was later transported to Ame-no-Mihashira along with its pilot, and the new backpack unit was eventually sent to the base and fitted onto the MS, resulting in the currently known Gold Frame Amatsu. 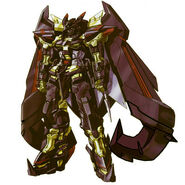