The Mistral is a mobile armor from the anime Mobile Suit Gundam SEED.[1][2]

An old model, general-purpose Mobile Armor that was once the primary machine of the Earth Alliance, the Mistral was relegated to a space-use, multipurpose pod with the introduction of the more powerful TS-MA2 Moebius.[1][2][3][4] In this role, it is often employed as a worker machine in space colonies and aboard warships, and can be used for gathering resources, recovering damaged machines, and other such tasks.[1][2][4][5] Its upper section is equipped with four telescoping arms, and can detach from its base section and maneuver independently.[3][4][5] When the Mistral is separated into two sections, the base section can function as a trailer for carrying objects.[3][4] The Mistral can also be deployed for security-related missions, with its base section capable of mounting weaponry such as a 40mm Vulcan Gun on each side.[3] However, its combat capabilities are low and it is easily outclassed in combat by the Mobile Armors developed after it and the Mobile Suits.

Mistrals are used by many different groups, including the Earth Alliance, the Orb Union, the Junk Guild, etc. In January, CE 71, ZAFT attacked the neutral colony Heliopolis to steal the new mobile suits developed there by the Earth Alliance and Morgenroete.[6] To defend the colony, several Mistrals were deployed, but they were easily defeated by the ZAFT's ZGMF-1017 GINNs. Some days later, the Archangel entered the Debris Belt and deployed its Mistrals to gather resources and water.[7]

The Kimera is a customized version of Mistral used by the Junk Guild in their salvage operations. Nearly every Kimera is a unique unit customized to suit its pilot. For example, the Kimera piloted by Kisato Yamabuki is equipped with a large scoop-style shovel, while that of Lowe Guele mounts mobile suit-style arms, one with a conventional hand and the other with a drill bit. 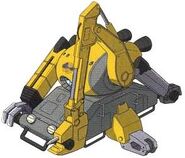 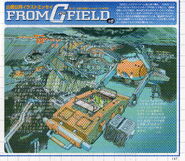