The MAN-00X-2 Brawrello was a prototype machine designed as a mass production Newtype-use mobile armor using a remodeled Zakrello. In terms of weapons it mounted two giant wire-guided heat natas for cutting attacks. For heavy firepower, it was equipped with a scattering beam cannon, which was mounted in the 'mouth' of the mobile armor.

It is equipped with the Psycommu system for piloting the MA and controlling its weapons, which were two wire-guided mega particle guns attached behind the main body and the heat natas.

In the "mouth" of the mobile armor is a scattering mega particle cannon. While capable of firing a powerful beam capable of sinking a Salamis-class ship in a single concentrated hit, the scattering nature of the beam makes it possible to engage multiple enemies at once.

The Brawrello is armed with two wire-guided, remotely-controlled mega particle gun units based on those used by the Braw Bro. In addition to serving as remote weapons, the particle guns could be pointed forward while still mounted on the suit for extra forward firepower.

The forearms of the Brawrello can be detached from the main body and remotely maneuvered with micro thrusters built into their base. The forearms are guided by thick wires that communicate the Newtype pilot's thoughts via the psycommu system. Each of the forearms are in essence large sickle-like blades that are heated to high temperatures in order to increase their cutting capacity, and can cause massive damage to any MS caught by them.

Mounted on the sides of the Brawrello are a pair of 4-tube missile launchers, which serve as secondary weapons in situations when the scattering mega particle cannon is in the process of charging or is ineffective against an opponent.

The completed unit was operated as a Psycommu training machine for pilots at the Flanagan Institute. Near the end of the war, the Brawrello was redeployed to the A Baoa Qu defense corps, where adjustments were made for it be used by regular pilots. 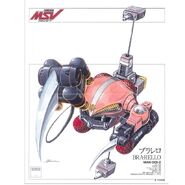