The MAN-003 Patulia is a prototype Newtype-use heavy assault atmospheric mobile armor. The unit is featured in the series After War Gundam X.

The MAN-003 Patulia is a prototype Newtype-use mobile armor developed by the Space Revolutionary Army (SRA) during the 7th Space War to be used in conjunction with the RMSN-008 Bertigo to carry out Operation Lilac. Unlike standard mobile armors, the Patulia requires a Newtype to be connected to its psycommu ducts (via the Life Unit) to activate and function. The Patulia is designed to be a heavy assault unit capable of overwhelming and destroying large amounts of mobile weapons single-handily.

The Patulia features two modes, a "Cruise Mode" which it uses for general movement, and a "Attack Mode" for combat. In its Cruise Mode, the Patulia's nose section is combined together and the mobile armor is unable to use any of its armaments. In its Attack Mode, the Patulia's nose section is split into two sections and the mobile armor gains access to its armaments.

Despite its massive size, the Patulia is capable of atmospheric flight. The ability of flight under the influence of Earth's gravity is a crucial part in its function as a heavy assault mobile armor created for combat on Earth. Moreover, the function of flight on Earth was central to Operation Lilac, an SRA operation in the 7th Space War that aimed to end the war in one stroke by destroying the United Nations Earth (UNE) HQ with the Patulia.

The Patulia's large size makes it an easy and vulnerable target, especially against beam weapons. To rectify this problem, Anti-Beam Field Generators are equipped on the mobile armor to protect it from beam attacks and increase its overall defensive capabilities.

The Patulia features four particle cannons, two are located in the chest of the "torso", while the other two are mounted beneath the "torso" section on the hips.

The Patulia is equipped with two Anti-Beam Field Generators to increase its defensive capabilities against beam weapons. This is due to the fact that the Patulia's large size makes it an easy and vulnerable target for beam weapons.

The MAN-003 Patulia was a prototype Newtype-use heavy assault mobile armor developed by the Space Revolutionary Army (SRA) during the 7th Space War. The Patulia was meant to be used in conjunction with five RMSN-008 Bertigo mobile suits to carry out Operation Lilac, a SRA operation aimed to end the 7th Space War with one decisive strike. The objective of Operation Lilac was to use the Patulia to destroy the United Nations Earth's (UNE) headquarters. The Patulia played a crucial role in this operation as its spearhead while the five Bertigos were meant to be escorts for the Patulia. In the end, Operation Lilac ultimately failed as the five Bertigos escorting the Patulia were all damaged or destroyed during atmospheric entry (possibly due interception by UNE forces), while the Patulia crash landed on Earth.

Sometime after the end of the 7th Space War, the crashed and damaged Patulia was founded by former SRA scientist Professor Dorat, who later changed his name to Nomoa Long and became the mayor of Fort Severn. After finding the Patulia, Long planned to reactivate the nightmarish mobile armor to punish the people of Earth for their actions during the war. However, the Patulia required a Newtype to be operated. Thus Long created a number of Cyber Newtypes in an attempt to create a suitable pilot for the Patulia. After a number of failures, Long created a Cyber Newtype that was powerful enough to pilot the Patulia. The name of this Cyber Newtype was Carris Nautilus, a young man who believed the activation of the Patulia would usher in an age of peace for the people of Fort Severn.

Although Carris was a suitable pilot for the Patulia, Long insisted on using Tiffa Adill (a genuine Newtype) as the Patulia's pilot after knowing of her existence. After capturing and eventually losing Tiffa, Long decides to force Carris to pilot the Patulia without his consent (which he would have probably refused to, having learned of Long's true intentions). Long activated the Patulia with Carris in the Life Unit and began a rampage, turning Fort Severn into a sea of fire. However, the Patulia's destruction was finally stopped by the mobile suit forces of the Vulture ship Freeden when their GX-9900-DV Gundam X Divider was able to break into the Patulia's control room to rescue Carris. Without a Newtype pilot to activate the Patulia, the massive mobile armor fell into slumber once again. 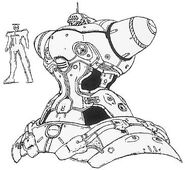 Rising from below Fort Seven