The Grublo Underwater Bit-Mounted Prototype is a standard MAM-07 Grublo retrofitted with a Psycommu system and a sonar dome attached underneath. It is a type of Quasi-Psycommu system that allows normal pilots to operate the MAM-07-X3. The rear fuselage is equipped with complex transmission units to control the bits. The claw arms are replaced with underwater-use bits.

To combat enemy's naval assets and aquatic MS, the Grublo relies mainly on a pair of 7-tube torpedo launcher mounted on its main body. Each tube carries 3 projectiles, which bring a total of 42 torpedoes. It has been shown that even with a glance hit, the force of the explosion can damage considerably a MS.

For its purpose which is similar to a submarine, the Grublo can launch 16 naval-use Surface-to-Air (SAM) missiles from 2 launchers in its body. They are mainly used to destroy military targets near the shore, like docks or shipbuilding yards.

The Grublo Underwater Bit Mounted Prototype replace its two claw arms for two bits, a type of mobile pod weapon that is equipped with a rocket thruster, verniers, a power generator, a single beam gun, and a receptor designed to work in conjunction with the Psycommu system. Their systems are designed to allow the bit an extended operating time independent of its carrier. The Psycommu system allowed the bits to receive commands via psycowaves from the pilot, thus allowing for control that is not interrupted by Minovsky particles.

The Grublo Underwater Bit Mounted Prototype features a sonar dome, the same device used by submarines and surface ship. Its purpose is to house electronic equipment used for detection, navigation, and ranging, tasks which are critical to a naval MA.

During the One Year War, the researchers of the Flanagan Institute discover that Newtypes emit powerful thoughtwaves - similar to regular brainwaves, but not electrical in nature - which they call psycowaves. The Flanagan Institute goes on to develop a mind-machine interface called the psycommu (psyco-communicator) system, which receives these thoughtwaves and translates them into computer commands. Using this interface a Newtype pilot can direct remote weapons and operate huge mobile armors by thought alone.

Tests were conducted for about two weeks, during which it encountered two Earth Federation Forces warships, which were sunk in less than an hour. Although the development team was satisfied with its performance, the MAM-07-X3 was not formally adopted for production and is later restored to a standard Grublo. 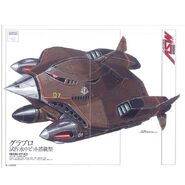 Retrieved from "https://gundam.fandom.com/wiki/MAM-07-X3_Grublo_Underwater_Bit-Mounted_Prototype?oldid=441166"
Community content is available under CC-BY-SA unless otherwise noted.