The Gaplant Kai a non-transformable version of the original ORX-005 Gaplant, renovated as a high-altitude interceptor. It is a high-performance mobile armor capable of both space and atmospheric combat.

The beam rifles and beam sabers of the original Gaplant were removed, and to better focus on its role as an atmospheric interceptor, the Gaplant Kai mounts two wing-mounted diffuse beam cannons, two pairs of Vulcan guns, and two 12-tube missile launchers.

At a major turning point, AEUG leader Quattro Bajeena broke into the Federation's national assembly at Dakar and denounced the Titans before the world. Learning the truth, the Federation quickly moved to support the AEUG and oppose the Titans. The MAK-005S Gaplant Kai was developed at the Augusta Newtype Lab and supplied to AEUG's terrestrial branch, Karaba, in order to respond to the invasion of Earth by Neo Zeon.

However, since Karaba already had the MSZ-006 Zeta Plus mobile suit series, the Gaplant Kai's production was limited to twenty units and was used primarily on making rapid, powerful strikes against enemies as they entered the atmosphere. 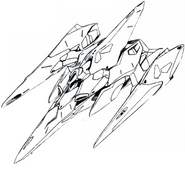 Retrieved from "https://gundam.fandom.com/wiki/MAK-005S_Gaplant_Kai?oldid=451149"
Community content is available under CC-BY-SA unless otherwise noted.