A submersible mobile armor developed and produced by Human Reform League (HRL) to enhance its maritime capabilities.[1][2][3] The Shuichai has high underwater mobility and maneuverability, and is armed with three sets of claws and eight torpedo launchers.[2][3][4] Like the MSJ-06II-A Tieren Ground Type, the Shuichai’s cockpit seems to be monitorless, with the pilot viewing images and data via the head-mounted display system in the helmet.[4]

By AD 2307, the Shuichai is considered an old machine but can still overwhelm enemy mobile suit in underwater combat.[1][2][4] However, it is no match for the highly advanced GN-001 Gundam Exia.[4] Due to its age, the Shuichai is now rarely deployed by the HRL; it can be found in countries outside of the bloc, and from there, it can end up in the hands of terrorist group, such as La Edenra.[1][2][4]

The Shuichai has three sets of claws for close combat, two on the large arms and one at the front of the machine.[2][3][4] Also known as grappling arms, they are for capturing and destroying enemy submarines, mobile suit, mobile armor, etc.[2][4]

The Shuichai has eight torpedo launchers for ranged combat, four mounted on each of the movable side armor.[3][4]

When GN-001 Gundam Exia attacked a La Edenra ship, it was ambushed by a hidden Shuichai and pulled into the waters. As Exia severed the Shuichai's arms to escape, the mobile armor fired its torpedoes but they failed to cause any damage. The Shuichai was then quickly sliced apart by Exia and exploded soon after.

Lockon Stratos and his GN-002/DG014 Gundam Dynames Torpedo have been conducting occasional armed interventions to stop the conflict between the HRL forces guarding their Orbital Elevator and the terrorists trying to attack the structure. However, due to the intermittent nature of these interventions, Veda predicted the enemy might came up with a way to thwart the operation. Therefore, Fereshte's Fon Spaak was sent out in the GNY-002F Gundam Sadalsuud Type F to provide support.

During the mission, a Shuichai used by the HRL was spotted in the surrounding waters. Lockon tried to snipe the mobile armor, but was unable to lock on to the Shuichai as it had released highly concentrated jamming substances into the waters. As Lockon was about to retreat before enemy reinforcement arrived, Fon decided to lend a helping hand. Using the submerged Sadalsuud Type F's superior search system, the Shuichai was located. Fon then had Hanayo sent the location data through Veda to Lockon's Haro, allowing Lockon to snipe the mobile armor. 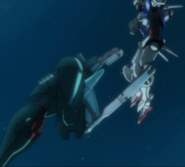