A ground combat variant of the VMS-15 Union Realdo (aka Realdo), the Union Realdo Hover Tank has undergone a major change in parts.[1][2][3][4] Its lower body is replaced by hover units, while its armaments, consisting of a fixed linear rifle and arm-mounted 60mm autocannon and rocket launcher, are primarily for rear fire support purposes.[1][2][3][5] Developed by Bell Factory, retrofitting the Realdo into the Realdo Hover Tank is relatively easy as the various parts of the Realdo are compartmentalized into blocks.[6][7] There is a variant unit capable of operating in space that serves a different purpose.

Mounted on the top of the mobile suit, above the head, this range weaponry fires electromagnetically accelerated rounds.[3][5][7]

Appearing in Mobile Suit Gundam 00 The Movie -A wakening of the Trailblazer-, this variant of the Union Realdo Hover Tank is named "Double Barrel" due to the equipping of twin linear cannons at the top.[3][8][9] Its arms are fitted with either a pair of 60mm autocannon pods or a pair of 100mm gatling guns.[3][8][10] This old mobile suit can be deployed for the defense of the Orbital Elevator, where it is mounted on the elevator's cargo-use linear rails and can move on them.[8][10][11] It can also serve as additionally turrets on space cruisers, with adhesive and motorized mounting bolts used to attach it to the ship's hull.[8][10][11]

Multiple Union Realdo Hover Tanks participated in the operation in the Taklamakan Desert to capture the Celestial Being's Gundams. Years later, at least two Realdo Hover Tank Double Barrels were among the numerous mobile suits deployed by the Earth Sphere Federation Army in the conflict with the ELS. One unit, equipped with 60mm autocannon pods, was attached to the hull of a Baikal-class space cruiser. The other unit, equipped with 100mm gatling guns, was mounted on the surface of an Orbital Elevator. 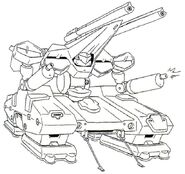 Bombarding the Gundams at Taklamakan Desert