The Mass Production Type Big Zam is a mobile armor from the Universal Century timeline.

Although based on the MA-08 Big Zam, the mass production type was redesigned to be much simpler, smaller, and less expensive than the powerful prototype. To lower production costs, the I-field of the original was replaced with an anti-beam coating applied to the armor. The Mass Production Big Zam's primary weapon was a large mega particle cannon identical to the original's, but featured an armored shutter that could close over the cannon's aperture. Due to the massive output of the cannon, the Big Zam could only fire while stationary, and even then needed special support legs to keep from falling over. On the other hand, the mass production model featured an improved cooling system that would have eliminated the original's overheating problems. The Mass Production Big Zam's only other weapons were a set of missile launchers mounted at the top of its legs. The legs carried two sets of missiles, one a set of standard missiles the other a set anti-air missiles.

Supposedly the Mass Production Type Big Zam would have a Minovsky Craft system so that it could fly in the Earth's atmosphere. This would make it a more easily transported across long distances and rough terrain where it would be hindered by its size and weight.

The primary weapon of the MP Big Zam line of mobile armors is a large mega particle cannon mounted in the units' torso. It is a powerful beam weapon that is used in heavy assaults against heavily fortified targets. The Mass Production Big Zam's mega particle cannon differs from that of the prototype in that it uses a more efficient cooling system and a protective shutter that covers the cannon when it is not in use.

Set in the MP Big Zam's legs is a set of missiles launchers, 4 per leg. It is likely that these missiles are used for standard ground targets such as tanks and mobile suits.

During the One Year War, one of the Principality of Zeon's most fearsome weapons was the MA-08 Big Zam. This massive mobile armor was originally developed for mass production, but the base model was refined into a much more expensive form. As a result, the planned mass production version of the Big Zam was more than just a copy of the original. 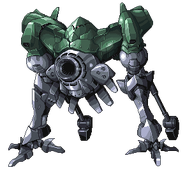 Retrieved from "https://gundam.fandom.com/wiki/MA-09_Mass_Production_Type_Big_Zam?oldid=497956"
Community content is available under CC-BY-SA unless otherwise noted.