Developed near the end of the One Year War, the Val Walo incorporates the advantages of the MA-05 Bigro's high straight-line acceleration. It was a major improvement over the original Bigro. It is a heavily-armed machine that includes a large number of innovative weapons produced by the research conducted at the lunar city of Granada. Improvements were being made to the YMA-06 even as battles took place on the Moon.

The jammer was removed, but it had a much more powerful armament. It sported a mega-particle cannon, two anti-air beam guns, a pair of 2-tube missile pods, vulcan guns, larger claws, and three "plasma leaders", a significant improvement over the original leader weapon used on the MAX-03 Adzam. They would open up, deploy around a target, and emit electrical plasma that would overload a mobile suit's systems and electronics. With its thick, sloped armor, it is one of the machines that renders the beam rifle useless without the use of an I-field.

A powerful beam weapon mounted on the underside of the Val Walo. Even a glancing blast was capable of melting the Zephyranthes' shield.

A pair of retractable beam guns mounted in the forward "wings" of the Val Walo.

Projectile weapons fired in groups of three. When deployed, the Plasma Leaders lodge in the ground in a triangle formation around an enemy mobile suit, whereupon they project an energy field that immobilizes the enemy.

A pair of pincer claws mounted on the underside of the Val Walo which it uses to seize and crush enemy mobile suits.

In the last few weeks of the One Year War, a variant of the MA-05 Bigro was produced, the MA-06 Val Walo. However due to the late time of the war, only three units were built at Granada during the war, and only saw combat at A Baoa Qu. One known unit survived the war and was repaired by crippled Zeon pilot Kelley Layzner in his junkyard in the depths of the Lunar city Von Braun.

In UC 0083, Kelley joined forces with his old wingmate Anavel Gato to help him in the Delaz Fleet Operation Stardust. Kelley modified the Val Walo so that could pilot it in his one-armed state and attacked the Albion (MSC-07) while it was docked at Von Braun. The battle however ended with the death of Kelley and the destruction of the Val Walo at the hands of the RX-78GP01-Fb Gundam "Zephyranthes" Full Burnern. 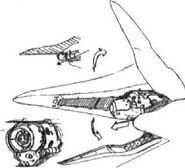 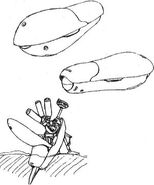 Skimming across the lunar surface

Close up of a fully-extended Plasma Leader

Val Walo grabs the Gundam GP01Fb with its large pincer

The end of Val Walo after defeated by Gundam GP01Fb