The MA-05R Big Ruf is a space mobile armor from the Universal Century timeline. It first appeared as a part of the MSV-R line.

The Big Ruf is a modified Bigro unit designed to strike at enemy vanguard fleets. The Big Ruf is equipped with a very powerful fusion reactor to power a Minovsky particle scattering system that jams warship and MS sensors. Propulsion includes a pair of nuclear powered rocket engines and an extra pair of boosters, giving it a powerful thrust. Armaments include a pair of large claw arms with limited AMBAC ability, a mega-particle cannon in the nose, two 4-tube missile launchers, and two 6-tube Missile Launchers on the extra pair of boosters. Mounted underneath the Big Ruf is an anti-ship missile with a total length of approximately 100 meters, which is the same type that was used by space fortresses.

The mobile armor's main and only form of close combat are a pair of large, sharp claws mounted on its long arms. These are normally used for clawing at enemies and causing massive damage with a combination of the claw's strength and the momentum built up by the mobile armor. They could also be used for maneuvering in space.

Mounted in the front of the mobile armor is a powerful mega particle cannon. This weapon has been shown to have enough power to destroy a battle ship with a single shot.

Located just behind the mega particle cannon are a pair of 4-tube missile launchers which serve as secondary weapons in situations when the cannon is in the process of charging or is ineffective against an opponent.

A new addition to the mobile armor are a pair of 6-tube missile launchers. In addition to increasing the overall fire power of the unit, they also have built-in thrusters for an increase in acceleration as well.

Like the Bigro, the Big Ruf uses a Minovsky Particle Scattering System to jam the sensors of warships and mobile suits. This allows it to sneak up mostly undetected by enemies; however, it can still be seen visually.

At A Baoa Qu in early December of U.C. 0079, three MA-05 Bigro units were converted into MA-05R Big Ruf's. During testing, one of the MA-05R Big Ruf units was assigned to Colonel Robert Gilliam and painted in his blue personal colors, but apparently somebody else piloted it during the Battle of A Baoa Qu. All three Big Ruf units were reported lost during the final battle of the One Year War.

One heavily modified unit was used by the Republic of Zeon in U.C. 0096. On December 8th, when Riddhe Marcenas broke into Republic of Zeon territory in his ReZEL Type-C (Defenser a-Unit) (GR), this unit engaged Riddhe, firing its mega particle cannon at him. Though initially at a disadvantage, Riddhe was able to destroy the Big Ruf's booster with his hyper beam saber. The Big Ruf's main unit survived intact, but was forced to stop its pursuit, since it was nearing the restricted area around the Magallanica.

A variant used by the Republic of Zeon costal defense force in U.C. 0096. Its Bigro portion appears to have been heavily modified, with much shorter arms and a different mega particle cannon configuration. Instead of the large anti-ship missile, it was equipped with a large booster that resembles a spaceship. Despite its radically different silhouette, Riddhe Marcenas' ReZEL Type-C still identified it as "MA-05R". 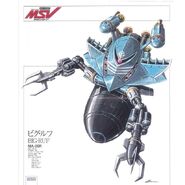 Big Ruf (bottom) being escorted by a pair of Rick Doms

In Return of the Lion