The MA-05M Bigro Meir is a mobile armor designed by Kunio Okawara, which was originally featured in Gundam Tactics Mobility Fleet 0079, but has also appeared in the SD Gundam G Generation games.

The MA-05M Bigro Meir is a Principality of Zeon Limited production mobile armor for space use that was deployed in battle in the last stages of the One Year War. This machine is an improved version of the MA-05 Bigro, in terms of mobility, armor and firepower. Instead of missile launchers in its body, it has beam cannons built into its claws, enabling it to carry out more flexible attacks. Both the Mega Particle Cannon and Minovsky Thermonuclear Reactor have been improved in terms of output. Finally, the Bigro Meir's improved mobility is achieved by its more streamlined frame and two rear thrusters that almost resemble legs.

Mounted in the nose of the MA, and concealed by a retractable cover when not in use. The mega particle cannon fires a powerful beam capable of sinking a battle ship in a single hit.

The Bigro Meir's main and only form of close combat weapon is a pair of large, sharp claws mounted on its long arms. These are normally used for clawing at enemies and causing massive damage with a combination of the claw's strength and the momentum built up by the mobile armor. They could also be used for maneuvering in space.

The MA-05M Bigro Meir's development has been veiled in mystery for a long time, and even among Zeon personnel it is referred to as a "phantom unit". It is said to have a complex history, and was supposedly developed by the Granada company Zeonic rather than the MIP company. It is also suggested that the Bigro Meir was the intermediate design stage between the MA-05 Bigro and the MA-06 Val Walo. Few units were produced, with some reported to have been deployed in the defense of Solomon and A Baoa Qu. However, it is said that the concept behind the Bigro Meir would be carried over to Axis' mobile suits, the AMX-006 Gaza-D and AMA-01X Jamru Fin.

Bigro Meir as seen on MSV-R: The Return of Johnny Ridden 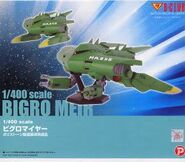 Retrieved from "https://gundam.fandom.com/wiki/MA-05M_Bigro_Meir?oldid=446093"
Community content is available under CC-BY-SA unless otherwise noted.