During the battle of A Baoa Qu, Zeon fielded the MA-05Ad Big-Rang ("Ad" stands for "Ammunition Depot"), a massive mobile armor designated as "Mobile Frontline Bridgehead" created by combining the modified MA-05 Bigro Unit 6 (late model) with the torso of a large Mobile Armor that was in development. The Big Rang's powerful reactor supposedly allowed it to quickly replenish its energy supply (although Lt. Oliver May, the unit's test pilot, was dissatisfied with the recharge rate of the main beam cannon aboard, and was reduced to firing short low-power bursts soon after entering combat). The most important feature of the MA, however, was a modified catapult/hangar within the lower body, which allowed MP-02A Oggo Mobile Pods to dock, repair, resupply, and continue fighting; in essence, it vastly extended the combat period for both the original Bigro and Oggo. However, it sacrificed the speed and maneuverability of the Bigro - The Big Rang effectively became a mobile turret.

For Big Rang, its main and only form of close combat armament are a pair of large, sharp claws mounted on Bigro unit's long arms. The claw arms were modified version of Bigro's original with enhanced claw joints and forearm coolant tanks. They are normally used for grabbing at enemies and causing massive damage with a combination of the claw's strength and the momentum built up by the mobile armor.

Mounted in the front of MA's Bigro control unit is a powerful mega particle cannon. This weapon has been shown to have enough power to destroy several Salamis-class cruisers with a single shot. The mega particle cannon is powered by Big Rang's powerful reactor which is supposedly to quickly replenish its energy supply. Actual combat had shown its power supply is unstable to render Big Rang to fire short bursts of low-power mega particle shots thereafter, but they are just as deadly against Federation's warships.

Located just behind Bigro control unit's mega particle cannon are a pair of 4-tube missile launchers which serve as secondary weapons in situations when the cannon is in the process of charging or is ineffective against an opponent.

Located on the left side of Bigro control unit is large-caliber multi-tube Gatling cannon which serves as the Big Rang's secondary weapon in situations when the mega particle cannon is ineffective or inappropriate against small, fast-moving opponents such as mobile suits or mobile pods. The Gatling Cannon has a high-rate of fire and it is able to damage the relatively light armor of a mass-produced Federation mobile weapons.

Big Rang is equipped with a total of 4 rectangular Counterbeam Chaff Launchers (30 tubes in a 6 x 5 array), with 2 on each front side of MA's Ad unit. Once launched, each counterbeam chaff forms a temporary anti-beam coating surrounding Big Rang's immediate cavity, which is able to withstand the beam shots from Federation's Salamis-class' main guns for a very limited time. Similar defense mechanism is also spotted on EFF's General Revil battleship in U.C. 0096.

Big Rang is equipped with 2 sets of 3-tube large anti-ship missiles, with each set being located at the rear of MA's Ad unit. A single missile is powerful enough to destroy a Federation's Salamis-class cruiser.

Inside Big Rang's massive Ad unit is a modified catapult/hangar which allowed several MP-02A Oggo mobile pods to dock, repair, and resupply simultaneously. This is to allow Oggo squadron to sustain long battle periods. However, the sheer size and weight of the armor-depot unit sacrificed the speed and maneuverability of the Bigro control unit.

The Big Rang only saw combat during the Battle of A Baoa Qu, defending the E-field (the "east" side of A Baoa Qu) and later covering the Zeon retreat through that area. It helped keep a majority of the Oggo pilots alive by dispensing beam dispersion chaff, while destroying at least 8 ships, including 1 Magellan-class battleship in a dark-green color scheme (possibly a flagship), another Magellan-class and its two Salamis-class cruiser escorts in a single shot at the beginning of the fight, and 3 more Salamis-classes destroyed single handedly later in the battle, and over a dozen Federation RGM-79 GM mobile suits and RB-79 Ball mobile pods. It was eventually destroyed under heavy fire, but its pilot, Oliver May, miraculously survived and was rescued by Lt. Monique Cadillac in her EMS-10 Zudah. 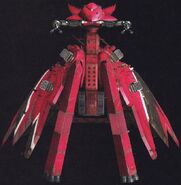 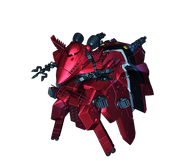