The M91 Gundam M91 is a Gunpla from Gundam Build Fighters Amazing Ready. It is built and piloted by Julian Ayers Mackenzie.

The Gunpla used by Julian Mackenzie, England's representative during the 8th Gunpla Battle World Championship. The "M" in the Gunpla's name was adapted from the Mackenzie family name. The Gundam M91 is assembled based on an enhanced concept of the F91 Gundam F91 Imagine, which Mackenzie used in the past. The number of V.S.B.R.s, which are its main firearms, have increased to four from two and its MEPE function (creating afterimages with mass) is also present. The newly created M Lance is the Gunpla's main armament and has astounding penetration capabilities that are beyond those of ordinary spears.

During combat, the V.S.B.R.s are used for long-range attacks, and their four massive beams are handy in limiting enemy movements. The gigantic M Lance is used for high-speed, devastating charges, but a weakness of this attack is that it tends to be linear and can be easily read by the enemies. This can be countered through simultaneously using the MEPE to create body doubles. It is impossible for enemies to evade multiple Gundam M91s charging from all directions at once.

Equipped on the left arm, it contains a booster for thrusting the M Lance quickly. Three vulcan cannons are also built in the gauntlet's front section for intercepting missiles, etc.

The M Lance is the primary close combat weapon of the Gundam M91. It was assembled using parts from Gundam F91's beam launcher and a knight figurine's lance which had been passed down through Mackenzie's family. Its tip can generate a small electric shock which can weaken enemy particle fields, and can also rotate for more penetrating power. The emblem section is simultaneously a small shield and a beam shield emitter.

The same beam rifle as the Gundam F91, it has great rapid-fire capabilities.

The Variable Speed Beam Rifle, or V.S.B.R. for short, is a unique type of beam rifle mounted on the mobile suit. It can fire either low speed beams with high destructive power, or high speed beams with high penetrating power, sufficient to destroy two MS with one shot or pierce a beam shield. The Gundam M91 is equipped with four V.S.B.R.s, two on the backpack and two on the waist. The waist-mounted rifles are the same as those on Gundam F91's backpack. The pair on the Gundam M91's backpack are newly made and multifunctional; normally, they function as thrusters and can generate Wings of Light when opened, when they rotate down and are deployed in front of the mobile suit, they can be used as V.S.B.R.s. A total of four powerful beams can be fired.

A by-product of the Gundam M91's overwhelming power is high heat. Thus, it also has the same heat radiation system as the Gundam F91 Imagine, and the heat radiated when its face mask open can be used as an attack in close range.

The Metal Peel-off Effect, abbreviated as MEPE, is a mechanism where the the Gundam M91 can shed the outer layers of its armor, creating afterimages with mass. This makes it hard for the enemy to know where the real Gundam M91 is. MEPE can also be used to dissipate excess heat, and first appeared on the Gundam F91.

After rejecting the philosophy of the Second Generation Meijin Kawaguchi, which included denying family and friends, Julian began work on a new custom Gunpla. After being inspired following his match with Meijin Kawaguchi III, he built the Gundam M91 based on his experiences.

The Gundam M91's first match was against Toru Satsuki and his GAT-X105/TG Tall Strike Gundam Glitter in a practice round. Julian later used this Gunpla when facing against Masked Second G during the 8th Gunpla Battle World Championship. 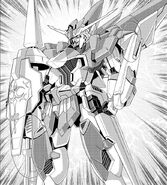 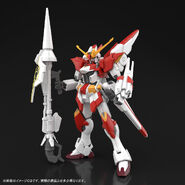 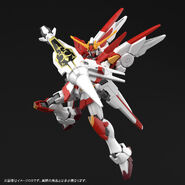 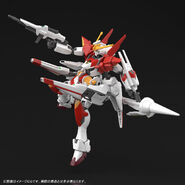 Retrieved from "https://gundam.fandom.com/wiki/M91_Gundam_M91?oldid=459175"
Community content is available under CC-BY-SA unless otherwise noted.