M'Quve (マ・クベ, Ma Kube?) is a character in Mobile Suit Gundam. During the One Year War, the decadent and amoral M'quve was the commander of a huge mining operation in Zeon-occupied Eastern Europe, which extracted vital mineral resources to feed Zeon's war machine. He reported directly to Kycilia Zabi, taking great pains to conceal the scope of his operation from the other members of the Zabi family. He piloted the YMS-15 Gyan and MAX-03 Adzam [1].

Although he is bureaucratic and skilled in political maneuvering, he has a calculating personality, is unsympathetic and ruthless, and gives the strong impression of being cunning and willing to use any means necessary to accomplish his mission. However, he has a tendency to be overconfident, as he often fails to follow through on his plans and is not prepared for failure. He was also criticized for not understanding the feelings of the soldiers on the front lines, such as cutting off supplies to Ramba Ral's unit for political reasons, and abandoning the soldiers who escaped from Solomon. In general, he was more of a politician than a military commander. On the other hand, he was also an antique enthusiast and collected antiques on the side of his duties, especially white porcelain vases estimated to be from the Northern Song Dynasty, which he favored and displayed in his office.

Colonel of the Principality of Zeon's Assault Mobile Force under the command of Kycilia Zabi. During the Zeon invasion of Earth, he became the base commander of the resource mining zone Odessa, and was in charge of resource mining, transportation, and base defense.

When the White Base threatens this operation, he attempts to set up a multifaceted trap in order to stop them. Around this time Ramba Ral's forces have been engaging the White Base. Dozle Zabi orders M'Quve to send three Doms to Ramba Ral to support him, but fearing the discovery of the mining base that even Dozle and Gihren are unaware of, he lies to Ramba Ral and claims that the Dom's transport was destroyed during reentry.

Following this, disgruntled by the White Base and Gundam's repeated attacks against mines under his control, M'Quve has his forces engage the White Base on repeated occasions trying to draw them into a trap and slow their advance. He also has the traitorous Federation General Elran attempt to slow the Federation's Operation Odessa. M'Quve shows his teeth when he chastises Gaia and Ortega for taking time to honor the death of their comrade Mash and their subsequent refusal to follow exact orders. As Operation Odessa looms, M'Quve goes so far as to tell Elran to sabotage his forces' advance so that he will only have General Revil to contend with. However, this attempt is thwarted when Amuro Ray reveals Elran to be a traitor.

As M'Quve's forces are overwhelmed, he threatens to launch a nuclear missile in order to destroy the forces which have boxed him in, despite the fact that such an act is in violation of the Antarctic Treaty. He is not bluffing; he fires the nuke, however, Amuro and Gundam manage to safely dispose of it. M'Quve arrogantly retreats to space, noting that with the resources that have already been collected "Zeon can fight for another ten years if necessary!"

After that, he became the commander of the relief fleet for Solomon, which was in danger of falling due to Operation Cemballo by the Earth Federation Forces, and left Granada. On the way to the rescue, he tries to abandon the escape pods of the escaping Zenna Zabi (the wife of Dozle Zabi, the commander of the Solomon base) and Mineva Lao Zabi (the eldest daughter of Dozle Zabi). However, he had already anticipated White Base's participation in the mop-up operation, and left Barom on the Gwazine-class returning to Granada, and moved to a Chivvay-class to absorb the retreating troops from Solomon.

Afterwards, the White Base is discovered near the Texas Colony. Up to this point, M'Quve had been a bureaucrat and commander, but now he boarded the mobile suit Gyan, which he had developed for himself. He went toe-to-toe with the Gundam piloted by Amuro Ray, who was beginning to show glimpses of a Newtype. At this time, M'Quve used various measures as usual, such as blowing up an asteroid, planting bombs in the airlock of the colony that lured the Gundam, and scattering floating mines inside the colony. These were reasonable actions that would surely deplete the Gundam and its armament, but as usual, they were inadequate, and in fact angered Amuro and increased his fighting spirit. At this time, Char, who was aboard the Gelgoog, offered to join him, but he refused because he did not like the fact that Kycilia was beginning to use him heavily.

M'Quve put up a better fight with the Gyan than Char had expected, but he still lacked a decisive factor, and gradually began to lose power to the Gundam, and was finally killed by two beam sabers that tore through his body from both sides. At the time of his death, he entrusted Uragang with a white porcelain vase, which Uragang said was "a good thing" and which he loved, to give to Kycilia.

In the theatrical version of "Soldiers of Sorrow", he appeared as the commander of Odessa, but he was depicted to the extent that he denied the Dom supply to Ramba Ral, he did not board Adzam, he did not communicate with Elran, and the scene of the threat by nuclear missiles was omitted. Also, in "Encounters in Space", after the scene where he rescued Zena and Mineva Lao Zabi who escaped from Solomon on the way to the rescue of the space fortress Solomon, he was accompanying Kycilia when Char reported the results of Lalah Sune's attack on Confeito to Kycilia. This was the last scene in which he appeared, and since the Texas Colony story was moved to before the Battle of Solomon, the Gyan did not appear and did not die in the battle.

In the manga "Mobile Suit Gundam: Char's Deleted Affair: Portrait Of Young Comet", he is depicted in the setting of the movie version, escaping from the A Baoa Qu fortress on the verge of falling with Zena and Mineva during the Earth Federation Forces' Operation Star One. He boards the Gyan and escorts Zena and others with Char, but is killed in battle by a direct hit from the main gun of a Magellan-class battleship.

M'Quve with his favorite antique 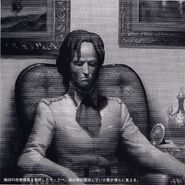