A bike-type battleship that is intended to be used on Earth but is able to function in space as well. The lower portion of the ship has mobile suit decks on either side for launches. Lightly armed, the Lysithea-class was designed to be used alongside its cousin battleship, the Adrastea-class. Its wheels are similar to the Einerad, and are impervious to beam weaponry. The wheels can also split horizontally to grant it flight capabilities either in space or in atmosphere.

The main weapons of the Lysithea-class are two 2-barrel main cannons situated forward and aft of the bridge. These weapons can turn 180 degrees.

The Lysithea-class is armed with twelve 2-barrel secondary guns. Six are situated on the port and starboard sides of the ship in groups of three, with another four mounted on the wheels, one on each side of each wheel. The remaining two are mounted on the dorsal and ventral bow area of the ship.

The Lysithea-class is equipped with two 6-tube missile launchers, one on each side of the bridge.

The Lysithea-class strategic cruiser was the lighter cousin of the Adrastea-class and the other ship class that makes up the Motorad Squadron. Like the Adrastea, it was designed to assist in intimidation and "pressing the land". 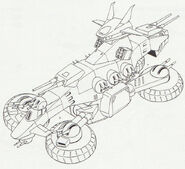