Lydo Wolf (リド・ウォルフ), widely known as the Dancing Black Death, was an Earth Federation mobile suit (MS) pilot during the One Year War. Lydo was a highly-skilled ace pilot credited with 68 enemy MS shot down and 4 ships destroyed. He appears in the original Mobile Suit Variations series and the Gundam Legacy manga series.

Originally a fighter pilot, Lydo singlehandedly shot down 21 enemy MS in one week while serving in the African front. His aircraft were usually painted in his personal colors, black, and was feared by Zeon forces as the "Dancing Black Death". With the introduction of new MS into the Earth Federation Army, Lydo was transferred to the MS corps. His personal colors were also carried over to his newly acquired GM Sniper II. Lydo was shot down and killed during the battle of A Baoa Qu. He was the third highest ranking Federation ace of the One Year War, behind Amuro Ray and Tenneth A. Jung.

In December, U.C. 0079, Lydo Wolf, having recently become a Mobile Suit pilot, was stationed in the African front, where a campaign to destroy the remaining Zeon forces on Earth was taking place. However, despite his reputation as a fighter ace - the "Dancing Black Death" - he was unable to shoot down even a single enemy after his transfer. Knowing his predicament, Wolf's captain, Vince, requisitioned a fighter from the headquarters in order to help him recover his acuity. However, what arrived instead was a Lightliner.

Soon after, Zeon forces attacked the base Wolf was stationed at. Vince was killed during the battle, and the base also suffered significant losses. Eager for revenge, Wolf painted his Guncannon Mass Production Type in black and flew toward the Zeon camp using the Lightliner. Taking advantage of the improved mobility, Wolf easily wiped out the Dopps and Mobile Suits protecting the camp. In the following campaign, he shot down 21 enemy units in a single week, marking the resurrection of the "Dancing Black Death". 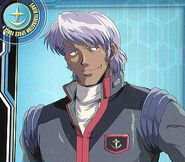