Lunamaria Hawke (ルナマリア・ホーク, Runamaria Hōku?) is a supporting character in Mobile Suit Gundam SEED Destiny. One of the three elite pilots, and the only female pilot, aboard the LHM-BB01 Minerva; she piloted a red ZGMF-1000 ZAKU Warrior at the start of the Second Alliance-PLANT War but later piloted the ZGMF-X56S Impulse Gundam.[1]

She is a sociable person who is both cheerful and charming. However, she can be quite stubborn and can be prone to jealousy during certain situations as shown after rescuing Shinn and Stella from being stranded in an island in the Special Edition. To her friends and loved ones, Lunamaria is very supportive and kind. She is also especially caring to her little sister, Meyrin. To her superior officers, she is respectful and is willing to follow orders, even if she doesn't agree with the orders emotionally. After her sister's apparent death, a larger aspect of Lunamaria's personality is shown, as she is seen as a forgiving person towards Shinn, who was ordered to kill Meyrin.

A skilled mobile suit pilot. Although her customized ZAKU Warrior is geared for long range combat, she is not lacking in close range combat skills as seen when she switched to the Impulse Gundam. Strangely, Lunamaria's skill with a gun outside a mobile suit is drastically different, as she is unable to make an accurate shot. This is due to her habit of twitching her wrist while pulling the trigger. However, after learning of this habit, her skills have improved. Other than that, she can fly a helicopter and is also quite good at intelligence gathering.

Lunamaria attended the ZAFT military academy with Meyrin, Rey Za Burrel, and Shinn, a refugee from the Orb Union. Outside the academy, on the day Siegel Clyne and some of his followers were executed due to Lacus's betrayal, Luna and her classmates listened to Patrick Zala's speech about the oppression perpetuated by the Naturals against them, out of envy for their developed abilities even though it was Naturals who created Coordinators in the first place.[2]

While hanging out with Vino Dupre during the LHM-BB01 Minerva's prelaunch ceremony, Phantom Pain forces steal ZAFT's three newest mobile suits the ZGMF-X24S Chaos, ZGMF-X88S Gaia, and ZGMF-X31S Abyss. Lunamaria and Rey then backup Shinn, who was fighting all three mobile suits by himself. Although she does her best, the internal damage to her ZAKU Warrior had caught up with her and forces her to land it safely in the LHM-BB01 Minerva.

When an unknown ZAKU Warrior boards the LHM-BB01 Minerva, Lunamaria restrains the two passengers from the ZAKU Warrior, who identify themselves as Representative Cagalli Yula Athha and her bodyguard Alex Dino, who request personnel assistance. By accident and a slip of Cagalli's tongue, Lunamaria learns that Alex is, in fact, Athrun Zala and this is confirmed by her sister, Meyrin Hawke.

During the LHM-BB01 Minerva's pursuit of the Mirage Colloid battleship, the Girty Lue, the LHM-BB01 Minerva faces the Extended Pilots, lead by Neo Roanoke. During their battles, Lunamaria typically faces the ZGMF-X88S Gaia, piloted by Stella Loussier. As they usually battle each other, the two develop somewhat of a rivalry.

When terrorists, who are following the ideals of the late Chairman Patrick Zala, attempt to drop the Junius Seven Colony onto Earth, the LHM-BB01 Minerva participates in the colony's demolition with the Joule Team. After returning Athrun and Cagalli to Orb, the LHM-BB01 Minerva stays there for repairs. While there Lunamaria shows concern for Shinn, due to his mixed feelings about his homeland, especially when the LHM-BB01 Minerva is forced to leave when Orb Union joins the Earth Alliance.

Spying on the Archangel

On route to the Black Sea, Athrun Zala who has reenlisted into ZAFT, as a member of FAITH, joins up with the LHM-BB01 Minerva in his ZGMF-X23S Saviour. This allows Lunamaria to freely express her developed interest in him, but ironically Lunamaria is naive to her sister's interest in Athrun and she is somewhat irritated and jealous by Meer Campbell spending time with him.

After the appearance of the ZGMF-X10A Freedom and the Archangel, Lunamaria is given a secret mission by Captain Talia Gladys, which was to spy on Athrun and gather information on the Archangel crew. After following Athrun in a helicopter where he is accompanied by Cagalli, Kira Yamato, and Miriallia Haw. Over the discussion, Lunamaria learns that Meer Campbell, who is acting as Lacus Clyne, is actually a fake and that the real Lacus was nearly assassinated by ZAFT special forces.

After giving Captain Gladys the recorded information, Lunamaria asks if this mission was given to her because there were doubts about Athrun's loyalty, But Talia responds that the mission was given to gather information on the Archangel's intentions. After this, Talia then orders Lunamaria to not tell anyone and to forget everything about this mission, which Lunamaria follows. Despite this however, Lunamaria developed doubts about both Athrun and ZAFT's intentions.

After the Battle of Crete, Lunamaria's ZAKU Warrior was damaged beyond repair and she is severely wounded. Upon arriving at Gibraltar, she fully recovered and becomes the new pilot for the ZGMF-X56S Impulse, due to Shinn receiving the ZGMF-X42S Destiny, for his accomplishment in Operation: Angel Down.

When ZAFT officials tell Lunamaria of Athrun and Meyrin's sudden betrayal, in a ZGMF-2000 GOUF Ignited which the two used to escape in, Lunamaria is both in shock and in denial believing they couldn't do something like that. Shinn then later informs her that he was the one who destroyed the GOUF and apologizes to her. Lunamaria then starts to cry with Shinn tearfully holding her.

Before the battle at Heaven's base, Lunamaria chooses to forgive Shinn, knowing that he was just following orders while blaming LOGOS for the cause of their deaths. She gets a hug from him and then they kiss and Shinn promises to protect her, thus starting a romantic relationship between them.

After the Battle at Heaven's base Lunamaria, Shinn, and Rey are awarded the Order of the Nebula a medal given to ZAFT's most outstanding soldiers. During Operation: Fury, Lunamaria launches from the LHM-BB01 Minerva, to shoot down a shuttle that is carrying the leader of LOGOS Lord Djibril, but she fails to do so. After the operation, Lunamaria discovers that both Athrun and Meyrin are alive.

When Lord Djibril unleashes the Requiem on the PLANTs, Lunamaria blames herself for failing to shoot him down and is determined not fail this time. When Rey gives her the task of destroying the Requiem's main control system, Shinn was concerned for her safety, but she convinces him to believe in her. With Shinn protecting her with the Destiny, she successfully enters Requiem's control base and destroys it. Afterwards her comrades cheer her on and she and Shinn embrace.

When Chairman Gilbert Durandal announced the Destiny Plan, which would judge people by their genetic destiny and not their individuality, which according to him will lead to peace, Lunamaria doubts the plan and tries to discuss the matter with Shinn, but due to Rey's interference, she is unable to do so as such. When the battle begins, Lunamaria attempts to attack the Eternal, but stops in midway when her sister Meyrin contacts her from the Eternal and asks her why she is fighting. Before the sisters can discuss things furthermore, Lunamaria is forced to retreat by the Black Tri-Stars' DOM Troopers attack.

Lunamaria then battles Athrun, blaming him for taking her sister Meyrin away. He badly damages Lunamaria's mobile suit, the Impulse, with his ZGMF-X19A Infinite Justice Gundam. Shinn then arrives, going into SEED Mode and attacking Athrun. After realizing and regretting about the terrible and horrible mistakes being made by both Shinn and herself, especially as she witnesses the fast and furious fight and argument between Shinn and Athrun, Lunamaria then interposed herself between the two of them, begging them to stop fighting so desperately (Since she couldn't bear to see both Shinn and Athrun destroying each other at all). However, unfortunately for Lunamaria, still in his SEED Mode, Shinn is far too berserk, bewildered and blind with rage and fear (especially when Shinn faces the haunting ghosts of his past), so he charges madly at Lunamaria for the kill (much to her surprise and shock). Nevertheless, fortunately for her, Athrun enters into his own SEED Mode, blocking Shinn's attack, and saving Lunamaria. Athrun then cripples Shinn's Destiny Gundam beyond repair, and Shinn crashes upon the surface of the moon.

Lunamaria rushes to Shinn's side, lands her damaged Impulse nearby in the lunar surface, and ends up holding and comforting a tearful Shinn in her arms, realizing that he's been manipulated by Rey and Chairman Gilbert Durandal, as well as the fact that he could have hurt and even killed her unwittingly. The two watch the Requiem superweapon explode and then the ZAFT fortress Messiah, crash into the Moon.

Both stranded pilots were rescued by Athrun Zala in the Infinite Justice. At the end of "Final Plus", Lunamaria is present with Shinn alongside Athrun and Meyrin, Kira and Lacus as he pays tribute to his deceased family in Orb. After Shinn makes peace with Kira, Lunamaria and Shinn then smile at each other and then leave together, following after the same direction Athrun and Meyrin left in, joining back up with the two.

In Gundam SEED Destiny: Special Edition, Lunamaria is seen with Shinn and Meyrin, who were traveling to an important meeting between Lacus Clyne and the PLANT Supreme Council.

Shinn is one of Lunamaria's closer friends, and the two worked together alongside Rey Za Burrel during their time in the Minerva. The trio already knew each other before that. On occasion, she also attempts to sympathize with Shinn's pain, though she does know that he can follow his personal emotions too much.

Their relationship became strained momentarily when Shinn, piloting the Destiny, shot down Meyrin and Athrun's GOUF Ignited. The two later reconciled and cried together over the loss after Shinn apologized to Lunamaria. After Lunamaria became the Impulse's new pilot, Shinn would often advice her on how to use the suit effectively. Before the Battle of Requiem, it is implied that Lunamaria and Shinn have already started a romantic relationship, and Shinn swears to protect Lunamaria from whatever harm comes her way during the war. She was with Shinn as they witness ZAFT's defeat and the destruction of Requiem and Messiah.

During the Omake Quarters Drama CD, Meyrin implies that Lunamaria is living together with Shinn at Orb, though Lunamaria notes at how frustrated she is at times because Shinn doesn't explicitly say he loves her and how platonic their relationship can be.

Meyrin is her younger sister and the two have a close relationship, with each sister showing extreme concern for the other when danger comes their way. An example of this was when Lunamaria told off some officers attempting to search Meyrin's room in order to find Athrun. Meyrin's communication with her also halted her attack on the Eternal momentarily.

Like many of the recruits that joined after the First Alliance-PLANT War, Lunamaria held great respect for Athrun and is aware of his various exploits during the war. While on the Minerva, Athrun acts as a mentor towards her and the other pilots, and she is briefly infatuated with him until she learns of his relationship with Cagalli. She was in disbelief when informed that Athrun had turn traitor and took Meyrin with him. Upon their meeting during the Battle of Messiah, she blames Athrun for endangering Meyrin in his attempt to escape, but still considers him as a friend. The two are able to reconcile after the end of the war. 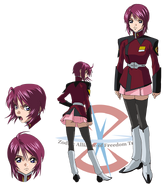 Lunamaria Hawke as seen on Gundam Seed Destiny - The Edge 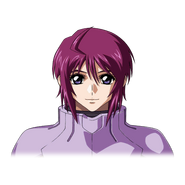 Lunamaria defeated as seen in Episode 28

Lunamaria has been hug by Shinn

Lunamaria being saved by Athrun

Retrieved from "https://gundam.fandom.com/wiki/Lunamaria_Hawke?oldid=442100"
Community content is available under CC-BY-SA unless otherwise noted.