Luin Lee (ルイン・リー, Ruin Rī?) or Mask is a character that appears in the Gundam Reconguista in G television series. He is a cadet at the Capital Guard Academy, and is Manny Ambassada's boyfriend.

He normally acts mature and responsible, but his status as a Kuntala weighs upon him. He is a kind and compassionate person as shown when he stood up for Bellri when a person tripped him up for a joke and Luin scolded him for it.

A top student in the 1010th class, Luin has shown to be a very skilled MS pilot, being able to hold his own against Klim Nick, and cause damage to his Montero. Luin has good reflexes shown when he evaded a punch from an officer who was testing him and Manny.

Luin was present in at the briefing about space and the captured girl. Back on Earth at the school when the Cheering Squad congratulated Bellri and the other pilots for defeating the pirates he notices one of the students trip up Bellri and he tells him not to pick on someone younger than him.

He is then selected along with Bellri to be guests at a ball where the Holy Minister would be attending, he and Bellri then team up to help evacuate the guests during the pirates attack. 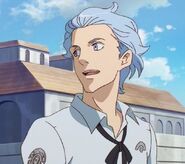 Mask in G-Phenex's cockpit (Gundam Reconguista in G: From the Past to the Future)

Luin Lee as seen on Gundam Reconguista in G (manga)

Retrieved from "https://gundam.fandom.com/wiki/Luin_Lee?oldid=452231"
Community content is available under CC-BY-SA unless otherwise noted.