The Gundam Wiki
Register
Don't have an account?
Sign In
Advertisement
in: Characters, After War characters, Female

One of the Newtype soldiers that served in the United Nations Earth during the 7th Space War, she rose in the ranks quickly and became a trainer for other Newtype pilots, including Jamil Neate. Secretly she took part in a top secret project developed by the U.N.E. that would bring a swift end to the war, called "Operation L". In the operation she would be placed in a chamber that put her in a state of suspended animation, allowing her to concentrate her full mental powers on the task at hand. The chamber was also equipped with a special amplifier that allowed her to project her mental powers far beyond what she could normally do. The chamber was also equipped with something else, a weapon that can only be activated by Lucille herself, that emits a sound similar to someone singing or music that can cause any and all mechanical devices to shutdown or malfunction as long as it is activated.

While sealed in a thickly armored container, and surrounded by FX-9900 GX-Bits, the fleet of ships she was being transported on encountered a strong typhoon that destroyed the fleet, sending her down to a watery grave along with the mobile bits. With her loss the U.N.E. erased as many files of the failed operation to try and cover it up, till 15 years after the war she was once more discovered by Olba Frost working with Marcus Guy. Her container unsealed she contacted Tiffa Adill, taking over the young girls body and watching as everyone on the Freeden fought bravely to rescue her. Seeing that the GX-9900-DV Gundam X Divider was about to be destroyed, and knowing of the feelings that Tiffa had for Garrod she activated the weapon she was attached to, giving herself away to the enemy in order to save the young pilot. The amplifier attached to her chamber was deactivated by Olba Frost after its use and she was no longer able to use the weapon.

As the Freeden launched another mission to try and save her she saw Jamil pilot the Gundam X Divider to try and rescue her, fighting alongside the others and holding their own till a large group of ships and mobile suits from the New United Nations Earth government arrived and threatened to kill Jamil. Combining her power with Jamil, she was able to help him activate the FX-9900 GX-Bits that were found with her, using them to destroy a number of U.N.E. mobile suits and forced them to retreat. Finally rescued by the Freeden, Lucille tells Jamil and everyone that she used the last of her bodies strength to save them and that there is nothing that they could do for her now except place her back on the bottom of the ocean where she was for over 15 years. Her final words to Jamil were that she was happy that she could see him as a man, and that at last she can find peace, her mind finally dying in the chamber.

Her body moved to a coffin, she was set to rest in a part of the ocean that came to be known for the powers she used as "The Sea of Lorelei". 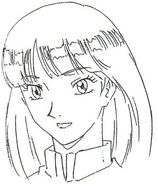 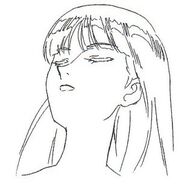