Lowe Guele (ロウ・ギュール Rō Gyūru) is the main protagonist of Mobile Suit Gundam SEED Astray. He's a technician from the non-governmental organization the Junk Guild and pilot of one of three Astray prototypes, the MBF-P02 Astray Red Frame.

Lowe has a carefree and easygoing nature. This makes him likable to the Junk Guild team, but it also means that he can be too trusting at times. Lowe, despite being a Natural, has no hatred against Coordinators, and has even saved one's life.

Although he is a Natural, Lowe can pilot the Red Frame with the assistance of an artificially intelligent computer called 8, which he salvaged from an abandoned spacecraft. In the Graveyard area he met an old man named "Un No", who transferred his skills and made the "Gerbera Straight" katana used by Red Frame for him. Lowe is unusually gifted at troubleshooting things at first glance, usually being able to fix them on the spot.

Born in C.E. 51, he joined the Junk Guild when he was 16 years old. He is a mechanic genius and could fix any problem usually at the first glance. His first assignment was the refitted transport ship HOME, one which he salvaged the Red and Blue Frame units, and Gold Frame's arm. He was immediately attacked by several organizations, mostly by Actaeon Industries, so they could snatch the Red Frame. Such thieves included Juri Wu Nien, who under the guise of an intern technician for the Junk Guild. However, in truth, Juri was gathering the combat data of the Red Frame for Erica Simmons of Morgenroete, so her attempt to steal the Red Frame ended in success with the data in hand despite having to return the Red Frame to Lowe.

When Lowe was in need of a melee weapon for Red Frame, he travels to the "Graveyard" in search for the Gerbera Straight. He finds it, however, it was damaged in a battle. The old man he encounters at the Graveyard teaches Lowe how to repair it while at the same time, trains Lowe to be a swordsman.

During his time with Red Frame in space, he encountered by accident Lacus Clyne's civilian vessel Silverwind under attack, and distracted EA forces long enough for her to escape. Lowe, along with his team, went to Earth and encountered Martin DaCosta, who had just retreated the remaining members of the forces under supposedly fallen Andrew Waltfeld. After aiding DaCosta with repairs and against an attack from Blue Cosmos, Lowe and the Junk Guild members headed for Orb.

Shortly afterward, on a mission to bring Reverend Malchio to Orb, Lowe witnessed the battle between the GAT-X105 Strike and GAT-X303 Aegis; from the wreckage, he rescued Kira Yamato. The Strike would later be found by Orb Forces, who were sent to find Kira Yamato and Tolle Koenig, both reported as MIA in the previous battle. Lowe, after handing Kira over to Reverend Malchio, joined his comrades to work on the mobile Giga-Float mass driver.

He headed into space with his teammates to join Liam Garfield aboard the ReHOME, a refitted tender ship for the Archangel class assault ship. Late in the war, Prayer Reverie joined the ReHOME's crew, along with his YMF-X000A Dreadnought DRAGOON mobile suit. Lowe mourned upon Prayer's supposed death, but rejoiced when Prayer discovered to be alive and well. Kira and Lowe met face-to-face on September 25, C.E. 71, the day before the Second Battle of Jachin Due. After the war Lowe rebuilt the Dreadnought into the YMF-X000A/H Dreadnought H and gave Jess Rabble the ZGMF-X12 Astray Out Frame. Afterwards he, together with Kisato Yamabuki, flew to Mars in the ReHOME but two years later he returns. 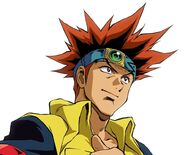 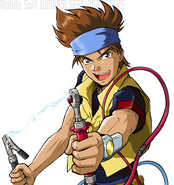 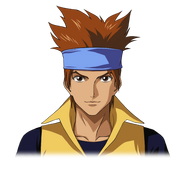 Lowe and Gai vs Gina