Djibril shares the same feelings Muruta Azrael had towards Coordinators: They are humanity's enemy, are dangerous and have to be exterminated at any cost. He is a persuasive, manipulative, spiteful man who never gives up unless he has won or is forced to retreat. Although he usually acts in a calm, confident and aristocratic manner, he has been shown to easily fly into an angry and sometimes even violent rage when the tides turn and his plans fail. Furthermore, Djibril is also an observant man, as he was always able to run away when he is at disadvantage.

Lord Djibril is a persistent man and will stop at nothing to accomplish his goals. He is also a skilled manipulator and was able to convince the other Logos/Blue Cosmos members to start another war to continue their ultimate goal to eradicate all Coordinators, in honor of their motto for the preservation of our blue and pure world. As both the leader of Blue Cosmos and the de-facto leading member of Logos, Lord Djibril is thus one of the most powerful and influential people in the Earth Alliance, if not the world.

Lord Djibril is a member of the secret society made up of the leadership of the military-industrial complex LOGOS, and is also the successor to former Blue Cosmos leader, Muruta Azrael. Djibril is first seen in Gundam SEED Destiny during the Junius Seven colony drop; at the time, he was at a meeting with top Blue Cosmos/LOGOS officials to discuss what would happen after the incident. Djibril decided that Junius Seven hitting the Earth would be a shameful incident for all those living on Earth, that the PLANTs (and by extension, all Coordinators) were at fault, and that they must all be exterminated; the members of Blue Cosmos/LOGOS all agreed to this decision, hence reviving Blue Cosmos' plan to exterminate all Coordinators.

When Djibril learned from Neo Roanoke that rogue ZAFT forces (Coordinators) were the instigators of the colony drop, he submitted the evidence to the people of Earth and Atlantic Federation President Joseph Copeland, thus starting the Second Alliance-PLANT War. President Copeland told the PLANTs that the Earth Alliance would retaliate with nuclear missiles if they did not agree to its ultimatum; however, when the EA strike force was launched, ZAFT used the Neutron Stampeder to annihilate the EA strike force by detonating their nukes prematurely. Djibril was outraged by this failure.

Throughout much of the war, Djibril stayed behind the scenes, viewing and influencing the events of Phantom Pain and others from inside a room in an underground compound located presumably beneath his mansion, surrounded by various monitors used to view all major events.

When the new GFAS-X1 Destroy Gundam, piloted by Stella Loussier leveled three cities in western Eurasia, Djibril announced to his fellow LOGOS members that this is a lesson to everyone that Naturals and Coordinators can never live in peace "and anyone who betrays that basic fact will find themselves a one-way ticket to Hell" (which will, later on, become his undoing and the world will hunt him down for it). However, his plans were foiled when the Freedom destroyed that unit.

After Gilbert Durandal revealed to the world that Djibril and his LOGOS organization were behind the whole war, he was forced to go into hiding. Djibril arrived at his final redoubt in Iceland, Heaven's Base, but a joint ZAFT and Earth Alliance strike force was able to overrun it. Djibril was able to successfully flee Heaven's Base, abandoning the other members of LOGOS in the process. He then fled to Orb, where the Seiran noble family sheltered him; from there, he successfully launched in a shuttle to space in order to rendezvous with Blue Cosmos loyalist forces at the Daedalus Lunar Base. He was among the many who watched Lacus Clyne reveal Durandal's duplicity of using a fake Lacus. Djibril was pleased at such an outcome and was about to contact Orb to possibly thank them for doing so. To his dismay, however, Lacus also said she was not a supporter of Blue Cosmos either.

Djibril was able to use the Requiem, a new Earth Alliance superweapon, in an attempt to destroy the seat of the PLANT Supreme Council, notably Durandal, at Aprilus One; however, interference by a ZAFT task force led by Yzak Joule caused Requiem to miss its intended target, instead destroying several other PLANTs. An attack on the Daedalus base by the Minerva led him to flee in the Girty Lue. However, his ship was intercepted by Rey Za Burrel and his ZGMF-X666S Legend Gundam. Lord Djibril was then killed by the beam spikes of the Large DRAGOONs that Rey launched at the Girty Lue's bridge. 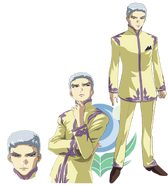 Djibril with his cat.

Djibril in his communication room

Djibril at Heaven's Base.

Pulling the trigger of the Requiem superweapon

Djibril getting vaporized by Legend 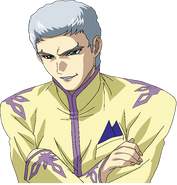 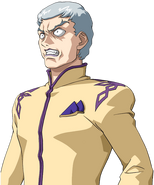