Loni is the daughter of Mahdi Garvey, a wealthy businessman and chairman of the Garvey Enterprises. She first met Banagher Links after he traveled across the desert, and publicly flirted with him (which leads to Suberoa Zinnerman teasing that he should go after her). Although she is Muslim, her clothing was not particularly concealing. She has a passion for children, telling Banagher that if she ever married she would have ten. Although Loni appears to be a kind and loving person, she bears a deep hatred against the Earth Federation over the execution of her mother, who killed a Federation soldier that was raping a Muslim woman.

In UC 0096, she and her brothers were ordered by their father to pilot the AMA-X7 Shamblo. Loni was in charge of the deflectors. Initially she complied her father's request but ultimately she was overcome with feelings of emotion over the destruction and death she and her family were causing, and she came to question her father's opinion of what he called the "White Men". She pleaded with her father to stop but he saw her change of heart as insubordination, prompting him to turn and shoot her. As she lay dying, she telecommunicated with Banagher (probably due to the effect of the psycoframe) and told him the Shamblo's vulnerable spot allowing him to destroy it and bring an end to the destruction it caused.

A mobile suit pilot in Principality of Zeon remnant group led by Yonem Kirks. She is the daughter of the wealthy Mahdi Garvey, a former Zeon soldier who brought the remnants together. Filled with hatred for the Earth Federation Forces who killed her father and mother, she seeks revenge as the pilot of the huge mobile armor Shamblo, which she used to decimate the Federation capital of Dakar.

When the remnants joined up with the Garencieres (the Sleeves ship that crashed into the desert and helped pull it out of the sand), Loni and Kirks joined with the crew to have a discussion with Full Frontal. Frontal acknowledged Loni and commented on how her father perfected Haman Karn's legacy. New coordinates from the RX-0 Unicorn Gundam's Laplace Program pointed towards Torrington, where Zeon's first colony drop occurred. Loni asked Frontal for permission to assault Torrington. Frontal admitted that while he commanded the forces of Zeon in space, he did not have control of the remnants who had been fighting a guerilla war since the One Year War. Thus, he concluded they had the autonomy to act as they saw fit. Loni agreed and gave a "Sieg Zeon". As she disembarked from the Garencieres, she passed Banagher Links, the pilot of the Unicorn Gundam, and told him not to let her down.

As the Zeon remnants rallied to assault Torrington, Kirks ordered Loni/Shamblo to avoid unnecessary civilian casualties. However, the Shamblo's psycommu malfunctioned, activating on its own and compelling Loni to launch her beam reflectors, which enabled her particle cannons to devastate the city.

The Garencieres then launched the Unicorn Gundam (piloted by Banagher Links). This was earlier than planned, and surprised Loni on the ground. The Gundam then fired warning shots in front of the Shamblo causing it to stop in its tracks. As soon as he touched down, Banagher holstered his weapon and pleaded with Loni, telling her to fall back if she wanted him to break the Laplace program seal. Loni expressed gratitude that the Garencieres' had crashed, because that crash had set in motion the events that were allowing her and the other Zeon remnants to take their revenge. Banagher told her that the families she killed will only harbor hatred for Zeon. Banagher told Loni that she would lose her humanity if she kept up the slaughter, but she rebuked him, saying that her parents never had a chance to surrender and that opening Laplace's Box would not bring her family back. She grabbed the Gundam with Shamblo's massive claw, but Riddhe Marcenas in the Delta Plus intervened by firing missiles at the claw, freeing the Gundam. Banagher asked if the chaos and destruction was what Loni truly wanted, but Loni said she had nothing else to live for. Banagher told her it is too sad to live for anger and against all expectation opened the Unicorn's cockpit and stepped out, to drive home his appeal to her to stop her attack. Rhidde was astonished by this move, but the Shamblo did stop as Loni felt unsure of herself.

Loni soon sensed Kirks' death at the hands of the Tri-Stars. Enraged that the Federation took away the last of her family, she started to go berserk and fired on Banagher. The Unicorn transformed into Destroy Mode, which made contact with the Shamblo's psycoframe. Both suits emitted a psycho-field which ravaged the surrounding area. Loni fired wildly at the Unicorn, but it deflected the beams. Banagher implored Loni not to let her hatred consume her. Loni countered his plea by saying that both of them were bound by blood to fulfill their parents' wishes, and said that Banagher was hypocritical since he too was given his power by family, and whether that power was a gift or a curse, it was their duty. Kirks' spirit told Loni that their war was over and that it was time to go. With her anger gone and overwhelmed with emotion, she entered a daze and relinquished control of the Shamblo. Despite this, the residual psychommu feedback caused the Shamblo to prepare a shot as Riddhe and Banagher charged toward her head-on. Ultimately, Banagher couldn't bring himself to kill Loni, who had broken free of the psycommu's influence and let go of her bloodthirst. The Shamblo, under the influence of the psycommu rather than Loni herself, fired it's mega particle cannon at Banagher and Riddhe. In a surprising act of redemption, Loni used her reflectors to shield Banagher and Riddhe from the Shamblo's main cannon, at which point Riddhe relented to his anger at the city's destruction and Banagher's insistence that Loni was worth saving, stole the Unicorn's beam magnum, and took the shot instead. The beam magnum instantly tore through the Shamblo's cockpit, incinerating Loni and putting her out of her misery. 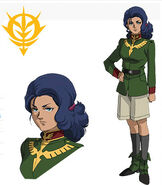 Loni and Mahdi Garvey as portraited in Gundam Unicorn novelization

Loni Garvey in pilot suit, inside the cockpit of AMA-X7 Shamblo as seen on Gundam Unicorn OVA

A tearful Loni Garvey in pilot suit, without the psycommu headset.