Lon Kou was a Federation Forces One Year War mobile suit ace who amassed 43 victories - including three ships in the RGM-79SC GM Sniper Custom. Despite his youth and low rank, Kou was known as a skilled pilot who preferred long-range combat. On December 5, UC 0079, he participated in a mission against Zeon military transport fleets in Side 5. He also participated in the Solomon attack on December 21, U.C. 0079. 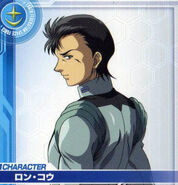 Add a photo to this gallery
Retrieved from "https://gundam.fandom.com/wiki/Lon_Kou?oldid=461588"
Community content is available under CC-BY-SA unless otherwise noted.