The Linear Gun Tank is a vehicle from Mobile Suit Gundam SEED.

During the defense of JOSH-A, a group of linear gun tanks were able to destroy several TFA-2 ZuOOTs. Though they were quickly destroyed by the more nimble TMF/A-802 BuCUE.[1] 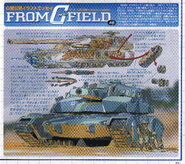