Lilia Flaubert (リリア・フローベール) is a character from Mobile Suit Gundam Side Story: Space, To the End of a Flash manga and the Mobile Suit Gundam: Encounters in Space video game, she was also featured in the Gundam Legacy manga.

Lilia Flaubert was the youngest pilot of Zeon's Granada Special Forces under captain Mallet Sanguine. In the novel version, she is portrayed as a timid but strong-willed woman. She is heavily favored by Kycilia Zabi as a test pilot for her prototype, and is ostracized by Mallet, who is jealous of this. She sometimes receives personal punishment from Mallet with a whip, but when Mallet is seriously injured and becomes delirious, she desperately tries to save him. She is unfazed by the muzzle of a gun and the sight of Mallet's burned face, and even kisses him when he asks her to, but she rejects him because all he wants is his mother's love. In Granada, he tries to stop a runaway Mallet and her machine is destroyed, but her cockpit is safe and she is rescued by Ford Romfellow and survives.

In the manga version, she is portrayed as a character with a dual personality. Under Mallet's command, she fights with a ruthless expression and even a smile on her face, but when he is not around, she trembles at the surprise attack of the Gundam, and is portrayed as a girl appropriate to her age. After the ceasefire in Granada, she follows Mallet and engages in battle with a Guncannon belonging to the Thoroughbred's MS squadron, but surrenders after Mallet's death. She is still a follower of the deceased Mallet even in the year 0084, and joins the terrorist organization "Wolf's Hammer" made up of Zeon remnants with Huyman Carlyle and Gusta Piper. In response to the Republic of Zeon's reverence for the Federation forces, she boards the Kampfer "Silver Lance" equipped with a vaporized warhead and a nuclear pulse propulsion booster for interplanetary cruising, and decides to launch a suicide attack on Side 3 in "Operation Silver Lance", but is stopped by civilian Matt Healy and others. She is forced to separate the Kampfer and close in on Ford, Mallet's adversary, but the vaporized warhead is ineffective in space, and she calls a truce with lamentations. 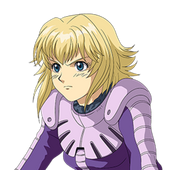