Lila Milla Rira (ライラ・ミラ・ライラ, Raira Mira Raira?) is a character that appears in Mobile Suit Zeta Gundam. She is a minor enemy of AEUG. She is also a survivor of the One Year War, though unlike most of the antagonists from the Federation, she is not a Titan officer.

In episode 3, she was ordered to stop the Argama from leaving Side 7 space, and when she saw it with AEUG, she tried to sink it, but failed and withdrew. Afterwards, she forms a joint front with the Titans to pursue the Argama, but she is unhappy with Jamaican Daninghan's decision to assign Jerid Messa, who is less skilled than her, as commander, and insults Jerid. However, she sees potential in him and teaches him combat skills, explaining the need to adapt to outer space. After the battle, when Jamaican blames Jerid for his disappointment, she says something in defense of him, and they reconcile, even promising to go out for drinks. In episode 7, she follows Kamille and the others into the 30 Bunch Colony on Side 1, guessing that there might be an AEUG base there. He takes Kamille as a hostage, but when she hears Quattro Bajeena (Char Aznable) say that the Titans used poison gas to massacre the colony's inhabitants, she gets upset and lets Kamille escape before leaving. Shortly after, she engages the Gundam Mk-II that Kamille is piloting. Like Emma Sheen, she was angry at the atrocities of the Titans and was likely to turn, so Kamille tried to persuade her, but she refused. In the end, she is overwhelmed by Kamille's abilities and is shot down. In her last moments, she realizes that she was an Oldtype before Kamille, a true Newtype, and that she had unconsciously been prejudiced against Newtypes. With the shooting down of Lila, Kamille was praised as "the second coming of Amuro Ray", but Jerid was moved to tears by her death, which further fueled his will to defeat Kamille. In the final phase of the Gryps War, she appears for a moment to guide Kamille as he confronts Paptimus Scirocco.

During the One Year War (Gihren's Greed) 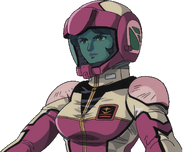