Female XO of the Nahel Argama. Her rank is Lieutenant Commander, and she is 40 years old. Initially, like the rest of the crew, she feels that Captain Otto Mitas is unreliable, but she gradually comes to have strong trust in him as he continues to try to be the captain of the ship in front of the anxious crew in the midst of the conflict over the "box." She lost her husband during the Battle of Solomon in the One Year War, and left behind her eldest son on Earth. 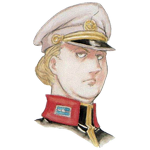 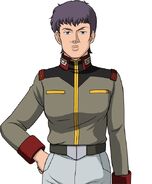