The Lesseps-class is a land battleship that first appeared in Mobile Suit Gundam SEED.

The Lesseps-class is a large land battleship deployed by ZAFT on Earth. Travelling through the desert sands using its scale system, the ship is armed with three 40cm dual cannons, and can unleash a large number of missiles and underground torpedoes from its 32 vertical missile launchers and 10 torpedo launchers respectively. It is also equipped with 34 dispensers for launching chaff, flare, or smoke rounds. Optionally, the Lesseps-class can be equipped with side turrets. Despite its heavy firepower, the primary purpose of the Lesseps-class is as a mobule suit carrier. The Lesseps lacks any linear catapults for launching its mobile suits, instead it has multiple gates, one at the front and several at the sides, for deploying its mobile suits.

A method of propulsion developed by ZAFT for use in land battleships. This system uses the vibrations of thousands of tiny mechanical scales to move over loose soil or sand, and can also function in water.

When the Lesseps fell into the hands of the Junk Guild, its three 40cm Dual Cannons were replaced with three large manipulator arms for handling cargo.

The lead ship of the Lesseps-class was assigned to ace pilot Andrew Waltfeld, the renowned "Desert Tiger", and served as the flagship of his North African occupation force, headquartered in the city of Banadiya.[1] As Waltfeld frequently piloted a TMF/A-802 BuCUE and later a TMF/A-803 LaGOWE in battle, operational control of the Lesseps often fell to his subordinate Martin DaCosta. The Lesseps was abandoned after suffering severe damage at the hands of the Earth Alliance ship Archangel during the Battle of Talbadiya.[2] It was then salvaged by the Junk Guild group around Lowe Guele, who laid claim to the ship, and after encounters with Blue Cosmos and ZAFT, used it to travel to the Orb Union.

In C.E. 73, another Lesseps-class vessel, the Desmond, assisted the battleship Minerva in the Battle of Gulnahan. This ship was under the command of Joachim Ruddle.[3]

Deploying LaGOWE from front gate (The End of the Sandstorm, HD Remastered)

In Combat (The End of the Sandstorm, Original)

In Combat (The End of the Sandstorm, HD Remastered) 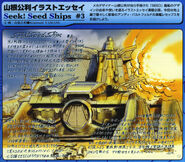