Leonard Fiennes (レナード・ファインズ, Renādo Fainzu?) is a fictional character in the side stories of Mobile Suit Gundam 00. In Mobile Suit Gundam 00P, Leonard is introduced as a young Super Soldier who is test piloting the MSJ-06YIII-B Tieren Kyitwo with his partner Delphine Bedelia for the Human Reform League's Next Generation Technology Development Laboratory. He later reappears in Mobile Suit Gundam 00I 2314 as a Gundam Meister for Fereshte, with codename Leo Sieg (レオ・ジーク, Reo Jīku?), piloting the GN-006/SA Cherudim Gundam SAGA, the GN-007/AL Arios Gundam Ascalon, and the GNZ-001 GRM Gundam. By A.D. 2314, he evolves into an ELS/Innovator Hybrid and was one of the pilots of GNW-100A Sakibure in A.D. 2364.

Leonard Fiennes is kindhearted and deeply cares for those near him, especially Delphine, and wouldn't want them to be hurt physically and emotionally. Although he was only 7 years old in 00P, he still tries his best in everything he does. Sometime after 00P, Leonard lost his left arm and was fitted with a prosthetic.

Leonard Fiennes was sent from the Super Human Research Institute to the Next Generation Technology Development Laboratory to become the Tieren Kyitwo's test pilot. In the two-seater Tieren Kyitwo, Leonard takes the front seat and was in charge of manoeuvring the MS and providing targeting data/information to his partner, Delphine, who will then pull the trigger. As Leonard is a super soldier, he has abilities beyond that of normal humans like superior reflexes and can use Quantum Brainwaves. However as a super soldier, his abilities were considered to be low.

Leonard is also a skillful MS pilot and was able to stand up against Gundam Rasiel and dodge all of its attacks in most of their duels. After 00P, Leonard and Delphine join Celestial Being. He presumably received additional training from Celestial Being members and knowledge of how to pilot GN Drive powered MS as in 00I 2314, he is a Gundam Meister with the reorganized Fereshte. During the battle with ELS, Leonard was partially assimilated with the alien and became a ELS/Innovator Hybrid.

In A.D. 2302, Leonard was assigned to the Next Generation Technology Development Laboratory; he partnered with Delphine Bedelia to serve as the test pilots of the MSJ-06YIII-B Tieren Kyitwo and to pursue the escaped Super Soldier Test Subject E-57. During one of the missions to capture Test Subject E-57, Leonard and Delphine witnessed the power of the Gundam Rasiel. They reported it to their superior in the Next Generation Technology Development Laboratory, and were assigned to capture the Gundam as the organisation wanted to use its technology to enhance its standing in HRL. During their first battle with the Gundam, they were able to dodge all the attacks from Sefer Rasiel Form 3's Proto Bits and even shot them down. However, they were overwhelmed and forced to retreat when additional support for the Gundam arrived. After the battle, Leonard was shown trembling at the thought of the Gundam and its terrifying combat abilities. He cheered up when Delphine praised his performance.

Leonard and Delphine continued to pursue the Gundam and encountered Fon Spaak and his mercenary group, who were also after the Gundam, twice. Both encounters were engineered by Fon, who wanted to use them to lure the Gundam out. During the first encounter, Leonard sensed something was amiss about the presence of Fon and his mercenary group in the area and this caused Delphine to give the order to retreat. During the second encounter, they fought with Fon and his Hellion Medium, and were unnerved by his crazy laughter. In an attempt to force the Gundam to appear, Fon allowed his Hellion Medium to be shot down, but Leonard managed to realise it was a trap and warned Delphine, who again ordered a retreat.

After the fight with Fon and his Hellion Medium, Leonard and Delphine were given new information on the whereabouts of Test Subject E-57. When they met with their target, Leonard suffered from a bad headache likely caused by Test Subject E-57's Quantum Brainwaves. Despite this, Leonard still tried his best to protect Delphine from Test Subject E-57 who intended to kill them both. He later succeeded in driving the enemy off by threatening to wake up the Test Subject E-57's other self. During the confrontation, Leonard revealed that he had all along been aware that Delphine would be hurt if she killed people, even if they are the enemy. This made Delphine realized that during their battles so far, Leonard's instructions never resulted in a fatal shot to the enemy. He had deliberately avoided causing fatal damage so as not to hurt her.

Leonard and Delphine were eventually contacted by Gundam Rasiel's pilot, Grave Violento, and they met him at the designated location. Upon seeing the Gundam Rasiel, Delphine wanted to fire at it, but Leonard stopped her as he sensed something was different. Leonard then activated the Tieren Kyitwo's external speakers and managed to persuade Delphine to let him handle matters first. Leonard asked the Rasiel for the reason behind this meeting, and through the Gundam's external speakers, Grave explained that he wanted to prove to his organization that the two HRL pilots aren't a threat. The battle then begins, Rasiel pulled back and Leonard wants Delphine to give him control of the Tieren Kyitwo. He also promised to giver her the shooting time. Leonard was willing to do so as he knows that their attacks would not penetrate the Gundam's tough armor, a direct hit would only knock the pilot unconscious. Despite their best efforts, Leonard and Delphine were still defeated by the Gundam Rasiel.

After the battle with the Gundam, Leonard and Delphine brought their damaged Tieren Kyitwo to HRL’s weapon maintenance centre for repair. The two pilots began talking about the enemy who had used the battle to save their lives. Through his quantum brainwave, Leonard had sensed Grave's thoughts during the battle. He had felt Grave's warmth and his persistence in doing the right thing, and they left a deep impression on him. After knowing the kind of person the enemy is, the two felt that they could not carry on with their mission to capture the Gundam. They sensed the enemy is not the opponent, and the mysterious organization he works for could be a 'righteous' existence. In comparison, what they and HRL had done seem to be 'evil'. Leonard cautiously expressed his wish to search for the enemy pilot as he wanted to be one of his comrades, and brightens up when Delphine said she had the same idea. The pair decided to continue with their mission to find the Gundam, but with a new goal in mind.

By A.D. 2314, Leonard and Delphine were members of Celestial Being. Leonard, as Leo Sieg, became the new Gundam Meister of the Fereshte. During the 10 year gap, Leonard lost his left arm and it was replaced by a prosthetic one. While Delphine (as Dell Erda) and Hayana are on their way back from Jupiter after participating in building the new GN Drives for GNT-0000 00 Qan[T], Leonard was conducting missions for Fereshte. It was not long before the Europa arrived from Jupiter.

After the Europa was destroyed by the GNMA-Y0002V Gadelaza and its debris fell to Earth, strange phenomena happened all around the world. Leo was sent to investigate one of the debris crash sites, and soon witnessed a young girl assimilated with silver crystals by an unknown man. Suddenly, Innovade Lars Grise arrived on the scene and tried to shoot the suspicious figure, but Leo stopped him. The man went back into the girl's house, transform it into an airplane and left with it. Leo gave chase with the Arios Ascalon and destroyed the target. After destroying the target, Leo notes that he had a feeling that something ominous is going to happen.

Later, Chall gave Leo a mission to destroy a facility where the aliens, now known as the Extraterrestrial Living-metal Shape-shifter (or ELS), are gathered. After firing the Arios Ascalon's GN Missiles at the facility, Leo wanted to finish it off with the suit's beam cannon but found that the weapon had malfunctioned. A piece of ELS had stuck onto the suit's GN Sword when it destroyed the airplane earlier; the beam cannon malfunctioned because the ELS is beginning to assimilate the Gundam. Leo quickly escaped, but the Arios Ascalon was completely assimlated by the ELS. Just then, Lars Grise appeared once again and rescued Leo. Leo was later picked up by Delphine and together, using their old Tieren Kyitwo which was retrieved by Hayana, they destroyed the ELS Arios Ascalon. A large group of ELS then came out from Jupiter's Big Red Spot, causing Leo and all others with QBW's to get severe headaches.

Leo later launched in the GRM Gundam to fight ELS alongside the ESF. The ELS managed to breach the ESF ultimate defense line and headed toward the Quantum Brainwave Facility on the Orbital Rings, which held all those people with potential Quantum Brainwaves. Leo noticed this and lured the ELS probes away using his QBW. He fought valiantly,but eventually the GRM Gundam was hit by three ELS GN-XIV's. GRM Gundam was almost assimilated by the ELS when fellow Meister Setsuna F. Seiei teleported to the ELS homeworld, stopping the ELS hostilities.

After the ELS War, Leo became an Innovator as he was partially assimilated by the ELS; his left arm was also restored. The assimilation also transformed the damaged GRM Gundam into the GRM Gundam E, which Leo would later used in the Innovator War to fight against the Old Human faction's Gadelazas. In A.D. 2364, Leo would join the Innovator Crew of Sumeragi, piloting the GNW-100A Sakibure, in exploring the vast universe.

Delphine Bedelia
Delphine is a partner of Leonard since his days in Next Generation Technology Development Laboratory. He considers her as an important person in his life.

Grave Violento
Leonard faced Grave numerous times during his hunt for the Gundam Rasiel. Grave's kindness and compassion made the young Leonard inspired to be a member of Celestial Being. 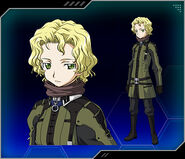