Leif Recitativo (レイヴ・レチタティーヴォ, Reivu Rechitatiivo?) is an Innovade and one of the main protagonists in the manga, Mobile Suit Gundam 00I. The story later reveals that his body originally belongs to Beside Pain, and he was taken over by this persona during some chapters.

Leif is a considerate young man who has expressed interest in finding a way for Innovades to coexist with humans.

Leif has the appearance of a 18 years old boy. He has the same type of base sequence pattern as Ribbons, pattern type-0026. Veda identifies Leif with registration number 08368-SA846. Leif has the ability to disassociate other Innovades from normal humans just by looking at them. This ability works whether its in person or on TV. Although 00I refer to Leif as an observation type Innovade, he has displayed the reflexes and speed of a battle type Innovade when restraining Dr. Clay. Like all Innovades, Leif is able to utilize quantum brainwaves to telepathically communicate with other Innovades, and utilize quantum networked devices. When Leif's body was taken over by Beside Pain, he can used the latter's “Install” ability. This ability forces a limited amount of Beside's personal data into another Innovade in order to control that Innovade's body.

Leif was awakened by Veda to gather six Innovades. Leif who lived as a human being one day woke up as an Innovade. However Leif himself doesn’t know why he was elected to be awakened by Veda. As he is switched into a new mission, the required data is downloaded into him. The subject of the mission that is given to him is “The gather of 6 Innovades”. For the purpose of accomplishing the mission, the ability to identify between Innovades and humans was added to him. Even though it is just the addressee’s image, even if the person himself is not projected, it is okay. For example, in the case that he sees an Innovade who is inside an MS on TV, far from seeing the face of the pilot, he can know up to his name. Leif awakes Dr. Telicyra who previously belonged to "Doctors without Borders". Both Leif and Telicyra meet with Earth Federation Force MS pilot Flinch, but during their meeting, Flinch is shot dead before Leif's very eyes. Later on, Leif and Telicyra awaken another one of their Innovade comrades named Bryn Sondheim. Bryn was shot as well, but he was saved by Doctor Herfi’s treatment. The one killing the Innovades turns out to be an Innovade himself. The man with the artificial left eye is named Lars Grise.

Later on both Leif and Telicyra were shocked that Bryn disappeared. Bryn’s QBW resonated in Leif’s and Telicyra’s brains. The voice also reached the Innovade hunter Lars. Relying on his voice, Leif and Telicyra managed to find him. In front of them was a doll-like girl. It was a girl who was in a lethargic state because of the large amount of blood drawn from her. In front of her, Doctor Clay appears. Leif asks where Bryn is, and Doctor Clay sneers, “Couldn’t the person you’re looking for be the one right in front of you?” The one dressed up as a girl was Bryn. Dr. Clay knew that the blood of the Innovades contained nanomachines that made them eternally young. He says that he wants to implement a blood transfusion that can make humans eternally young too. When he turned his gun to them, in an instant, moving as a battle type Innovade, Leif restrained Dr. Clay. Following Telicyra’s foot steps, they leave the place without killing Doctor Clay.

In chapter 4, Leif has a dream, Gundam Rasiel and 1 Gundam were fighting. 1 Gundam was piloted by a person resembling Leif while the Rasiel was piloted by Grave. Leif wakes up when the 1 Gundam blew up. Leif talked to Dr. Telicyra about the contents of his dream. The doctor told him, “Even if that was your past, you weren’t yourself back then. But, essentially, your memories shouldn’t be able to transfer.” Innovade’s individual bodies last a long time so they can be recycled quite a few times. The Innovades’ [recycling mechanism], is most likely the result of Veda not understanding human nature, and consequently, as a computer terminal, it sought only what was most efficient. Bryn informs Leif that something is calling out to the him, and send him an image of the 1 Gundam.

With Bryn’s cooperation, Leif heads to where the 1 Gundam is. Leif finally reaches the Gundam he saw in his dream, “1 Gundam.” “What are you going to do with such a dangerous thing?” Hixar Fermi appeared. Leif explained that he was on a mission. “Won’t you tell me about that mission? Beside Pain.” Hixar turned his gun on Leif. Hixar was moving based on the information he had gotten from Veda, “today, in this place, Beside Pain will appear.” And the 1 Gundam wakes up.

1 Gundam attacks Hixar, forcing him to leave. Leif then gets into the Gundam and was downloaded with the memories of Beside Pain. Beside Pain's character then takes over the body, and it is confirmed that the body was previously used by Beside Pain. Hixar sends off a message, requesting that Chall to prepare the Rasiel Gundam. Then Bryn relays Leif’s QBW to Telicyra, unaware that Beside Pain is now in control of the body. “They’re probably starting to kill the eye witnesses to keep information about the weapon which was test-fired secret,” Telicyra worries. Beside Pain then replies with “those aren’t Veda’s instructions. It’s the Federation who wants a orbital weapon. It’s the action of someone using that to carry out Aeolia’s plan from the shadows.” Beside then notes that Lars’ ability is to control machines from long distances and breaks off. Telicyra, having finished the conversation, conveyed his feeling of ill ease to Bryn as he had sensed something is different about Leif. Bryn told Telicyra that Leif’s QBW have became stronger.

Lars contacts Mememto Mori to attack Beside and 1 Gundam, but he protected himself using 1 Gundam's GN particles. In order to stop the battle, Bryn tested the access of Lars using QBW while Telicyra stops Beside who tried to throw the finishing blow to Lars who was suffering. Telicrya then realized that another persona had taken over Leif's body and threatened Beside that if he dies, he will not be able to awaken other comrades. Beside was forced to retreat.

Returning Back to Self

In chapter 11, Beside Pain in the 1 Gundam attacks Fon Spaak and his Gundam Astraea Type F2, which he receives serious injuries and had to withdraw from the battlefield. Then he transplanted his personal data to a reserve body and wanted to fight Fon Spaak once more. The body he left behind is being treated by Telicyra using the Innovade medical treatment data that Moreno left behind. Leif's body was starting to recover with the help from the start-up command that activates the nanomachines inside the Innovade's body.

In space, Leif, Telicyra and Fon discuss about the gathering of the six comrades. Fon observes that after gathering the six comrades, Leif and Telicyra's abilities seem to be useless. Telicyra suggested two possibilities: One, he and Leif may be given new abilities; Two, their abilities remain the same and are still useful. Fon then points out that it is also possible that the six comrades do not include them both. He also notes that if they are part of the six and their abilities remain the same, then the abilities of one of the other comrade can be deduced. Fon then asks about Beside's whereabouts and Hayano reveals that he is heading for Telicyra's home.

When they finally contacted Sulu Suluzu‎, who is at Telicyra's home, they are relieved to find out that Beside and his 1.5 Gundam were chased away by Lars. As the conversation is about to come to an end, Hermiya appears on screen and Leif immediately identifies her as one of the six. Later, Hixar joins Leif, Telicyra and Fon, and they talk about awakening Regene as one of the comrades. Leif is aware of the risk of doing so, but he thinks it is necessary so as to learn of new information that would be revealed to them once all six comrades have been gathered. After the six comrades are gathered at an Orbital Elevator, they learned that their purpose is to become the new observers and to perfect Aeolia Schenberg's plan that is to be accomplished through the help of three important parties: humans, Veda, and Innovades.

However, Regene decides to eliminate the other five comrades in pursue of his own goals, and have his accomplice, Beside Pain, attacks the Orbital Elevator the group is at using the 1.5 Gundam. After Beside Pain is stopped by Hixar, Telicyra, Leif, Lars and Bryn agreed to remove Regene from the group, triggering Hermiya's ability and causing Regene to lost all memories related to the six comrades and his awakened ability.

After Beside Pain is killed, Hixar and Hayana recovered the 1.5 Gundam. Leif now piloting the 1.5 Gundam heads toward the top of the orbital elevator. Then Beside takes over Leif's body once again and plans to kill the group, but he is interrupted by Fon Spaak. Fon piloting Gundam Avalanche Astraea Type F' battles 1.5 Gundam, and he soon gains the upper hand, dealing multiple hits to the 1.5 Gundam. Bryn sense Leif's QBW within Beside, and with Telicrya's urging, Leif successfully regains his body and removed Beside's persona. Then a small squadron of A-Laws mobile suits appears, lead by Revive Revival and Hiling Care in their GNZ-003 Gadessa. The A-Laws are not there for a fight, they just want the 1.5 Gundam. Fon has no problem with their request, noting that Ribbons wants Beside's character data. Leif hands over the 1.5 Gunam after he was promised that Beside would never appear again. In the epilogue, Leif has gone traveling around the world. 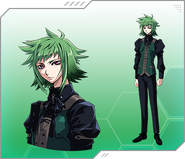